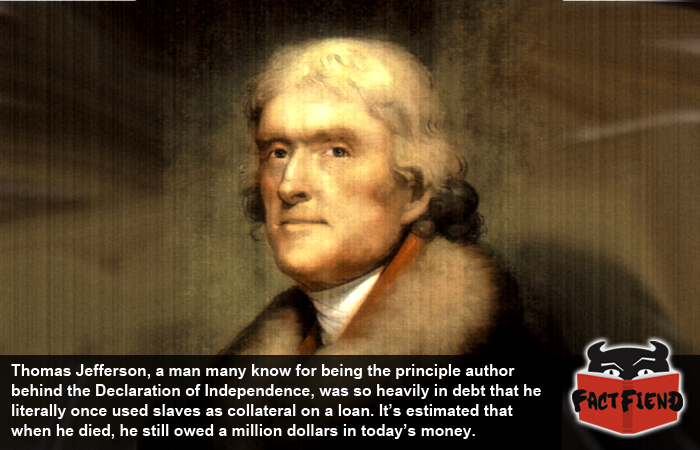 Thomas Jefferson is a name synonymous with one of the most, if not the most important pieces of writing in American history, the Declaration of god-damn Independence. Which is awesome, but did you know he also once use people  as collateral on a loan?

Just to be clear, we’re really not trying to besmirch the name of the one of the Founding Fathers, we love those guys and thank them for the free day off we get every 4th of July, but hey, being the president doesn’t mean you get a free pass from being featured on this site for doing something unthinkably dickish.

As noted above, Jefferson was heavily in debt almost his entire adult life and while many have been quick to note that a lot of the reasons why Jefferson clocked up so much personal debt were due to reasons beyond his own control, some of the blame rests squarely with him for living way beyond his means. For example, Jefferson would regularly hold huge lavish parties on his property where he would serve copious amounts of expensive food and wine, most of which was imported from France. Though figures are hard to come by, evidence gleaned from records kept by Jefferson’s staff indicate that he spent about 50 dollars on food and wine every single day, which would be equal to about 700 dollars today’s money. To put this in perspective, if you spent $2000 dollars on food and beer and then flushed another $2000 down your toilet every single week, for the rest of your life, you’d still be spending less money than Thomas Jefferson did.

Jefferson was so heavily in debt that according to his own meticulous records he regularly borrowed money from his own servants which he would invariably, never pay back. Part of the reason Jefferson was able to live so vicariously was because most of his creditors were simply to chicken-shit scared to ask him for their money back.

This isn’t to say Jefferson was at all selfish with his money, in fact one of the reasons he accumulated so much debt was because he would often lend money to people who never bothered to pay him back. But it does paint him as kind of a dick when you realise that even though he owed the equivalent of a million dollars in debt, he still spent hundreds of dollars in today’s money on himself, every day.

By far Jefferson’s least proud moment came in 1796 when he was trying to secure a pretty sizeable loan to help rebuild his house. When the bank asked Jefferson for collateral, he heroically put forward the only thing (other than his house and many possessions) he had of any value, his slaves. An offer the bank readily accepted.

Of course this shouldn’t sour your view of Thomas Jefferson because as noted by The Smithsonian, at that point in history it was accepted that “slaves were assets that could be seized for debt“, we just think it’s pretty ridiculous that one of the men who literally helped shape America once used human beings as collateral on a loan and almost no history books bother to mention it.