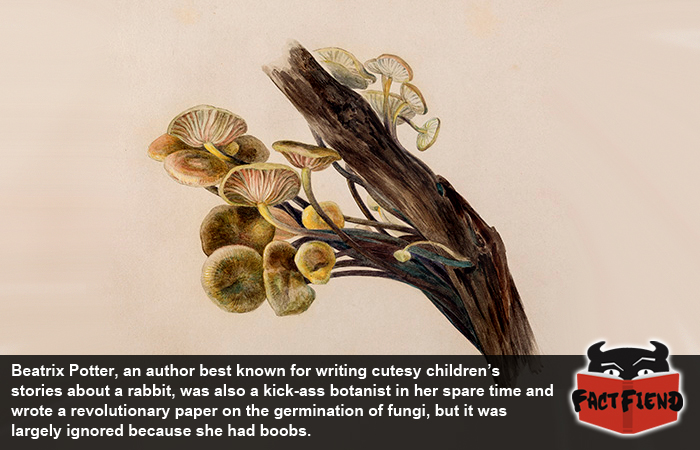 Beatrix Potter is best known as the author of a bunch of children’s stories about a the adventures of a tiny, adorable rabbit called Peter and his equally as tiny and fuzzy friends. Which is weird, because she was also a self-taught expert on mycology (the study of fungi) credited with being one of the first people to realise that fungi for symbiotic relationsships with their host, sort of like Venom from Spider-man.

According to experts on mycology, Potter’s work with fungi (most of which she did in her kitchen) was years ahead of anything her peers with entire laboratories and sexy assistants at their beck and call had come up with at the time and it’s recorded that she was observing and drawing bitchin’ pictures of fungi that actual experts in the field didn’t know existed. Hell, to this day mycologists still use drawings Potter drew over a century ago when talking about some species of fungi because they’re the best representation of them they have access to. In fact, Potter’s work with mycology, especially her theory about fungi being symbiotic and kind of gross would have been revolutionary if anyone in England would have taken their head out of their ass long enough to read it.

You see, although Potter was highly educated and motivated with a genuine interest in the field and some worthwhile ideas that warranted further study, most scientists dismissed her work outright simply because she had a vagina. While some of the criticisms levelled at Potter had merit, like some of the samples she used being contaminated, a fact she acknowledged and fixed, contemporary experts have described her singular paper on the topic as being one of the most “significant” contributions to the field by an individual.

Despite this, not only was Potter’s work widely ignored by, but when the Linnean Society of London agreed that her paper was kind of awesome, she wasn’t allowed to introduce a discussion about it because they didn’t allow women to attend meetings. We’ll be honest, it doesn’t really paint a society in a flattering light when their admissions policy is indistinguishable from one you’d find crudely stapled to the outside of a kid’s treehouse.

But here’s the best bit, the Linnean Society didn’t formally apologise to Potter for the staggering amount of sexist bullshit they’d flung her way until 1997. An apology Potter was unfortunately not able to accept in person because she’d been dead for 54 years. Speaking of which, as an example of the medically impressive amount of fucks Potter gave about nature and stuff, when she died, she left virtually all of her earthly possessions to the National Trust, an organisation dedicated to preserving the more tree-filled areas of England. She also gave all of her scientific drawings and papers to a library, where they went ignored for several decades because people apparently felt the need to kick Beatrix’s ego in the dick one last time.

If you’re still hankering for more nature facts, why not read about how toucans sometimes use their giant beaks to slap the shit out of other birds.