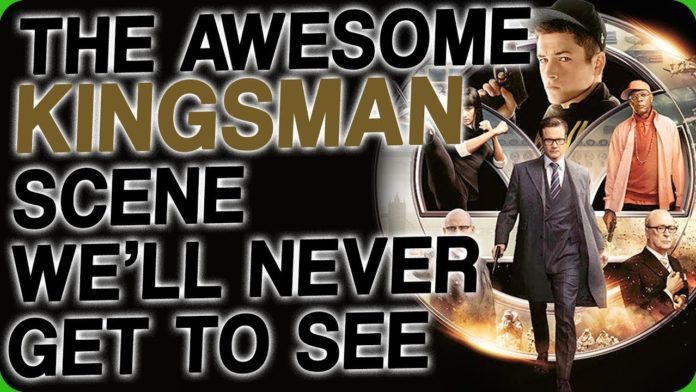 There’s a scene in the film Kingsman: The Secret Service where Colin Firth murder-shoots the shit out of an entire church full of assholes while the guitar solo from Freebird plays in the background. Now if that sounds like the most awesome, eye-punchingly badass thing you’ve ever heard, please pour one out for the original, much more violent version of that scene that was 7 minutes long.

For anyone who hasn’t yet seen Kingsman because they don’t like watching a 55 year old unflappable Englishman punch-shoot racists in the face: At the film’s halfway mark, there’s a scene in which Colin Firth, who is playing a gentlemen superspy, loses his fucking mind and and kills almost every person in a thinly veiled parody of the Westboro Baptist Church using a handgun, his bare hands and a crippling, almost insulting amount of mouth slaps.

During the 3 minute long scene, Firth’s character murders about 40 people while simultaneous inventing at least three new forms of foreplay. Due to the fact the scene involves people being murdered in a church, it was considered somewhat controversial by more squeamish critics, however the scene wasn’t as controversial as it could have been, primarily because the only people killed during it were racist shitheads, which don’t count as real people.

But here’s the thing, that scene was originally supposed to be twice as long and feature twice as much murder. According to Mark Millar, the original author of the comic the film is based on, he was shown an exclusive, 7 minute long, even more violent cut of the scene. Millar went on to explain that this longer, more awesome scene featured nothing but Colin Firth’s backhand, containing none of the cutaways featured in the version we got to see, instead focussing solely on knife hand chops to the throat and pew assisted flying tackles.

However, Millar, a self-admitted video game junkie, said that the scene was simply too violent for him to enjoy and he asked director Matthew Vaughn to tone it down just a smidge, because he didn’t think the world really needed to see Colin Firth punching racists for anything more than 3 minutes.

At Millar’s behest, Vaughn cut the scene from 7 minutes to 3 and added in a bunch of cutaways so that people wouldn’t be overwhelmed by the sheer amount of hyper-violence on screen. In other words, somewhere out there is a 7 minute long video of Colin Firth suplexing racists through stained glass windows and we’re not allowed to see it because it was just too metal.

To read about another movie where they cut out the best part, check out our article on how they cut out a scene in ‘The Grey’ where Liam Neeson punches a wolf to death.