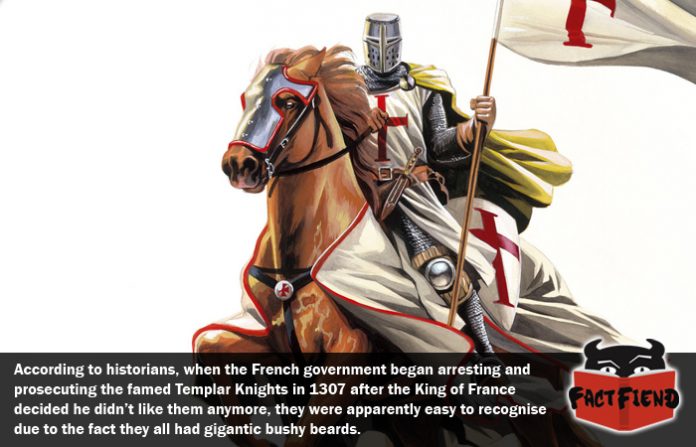 The Templars were a renowned, almost mythical order of knights and badasses famed across the ancient world for their ability to shatter ribcages with punishing, armor-clad right hooks and split wigs with lightning fast sword strikes. Or they were until the 14th century when nearly all of them were tracked down and killed, because they had beards.

To be clear, we don’t mean that the Templars were killed because they had beards, they were being hunted by the authorities who were able to easily identify them because of the way they liked to style their face fuzz.

The story goes that shortly after the Holy Lands were lost at the close of the The Crusades, the Templars, who up to that point had enjoyed near unchecked power, suddenly found themselves with little support and powerful enemies. The most notable of which was the Iron King, King Philip IV, a man who looked far less awesome than his nickname would suggest.

Like many nobles in Europe, King Dipshit was heavily in debt to the Templars, who controlled and loaned out a massive amount of wealth at the height of their power, and decided to take advantage the current air of distrust surrounding the order.

Using his status as King, Philip fanned the flames of a rumor that the Templars were engaging in acts of blasphemy (denying Christ), super blasphemy (spitting on the cross) and indecent kissing. All of these accusations were unfounded and captured Templars only admitted to them after being tortured. However, this was all King Asshat needed to issue an order to arrest every Templar in France.

The problem was that other than the fact they could crush a man’s skull with a sound-barrier crushing backhand, most Templars looked like fairly ordinary dudes. So the French authorities had to resort to identifying Templars by the only recognisable feature they all had, kick-ass beards.

Templars in turn began to shave their beards and remove their famous white tunics to avoid detection, leading to a cat and mouse game of sorts between the French authorities and the Templars. Meaning there was a time in history when angry French police were arresting and questioning men with glorious beards in the belief they were part of a mystical, secret brotherhood of badasses. Something that we’d be tempted to say is funny if it wasn’t also for the fact the Templars they did catch were sometimes tortured so much, and we’re not making this up, the bones fell out of their fucking feet.