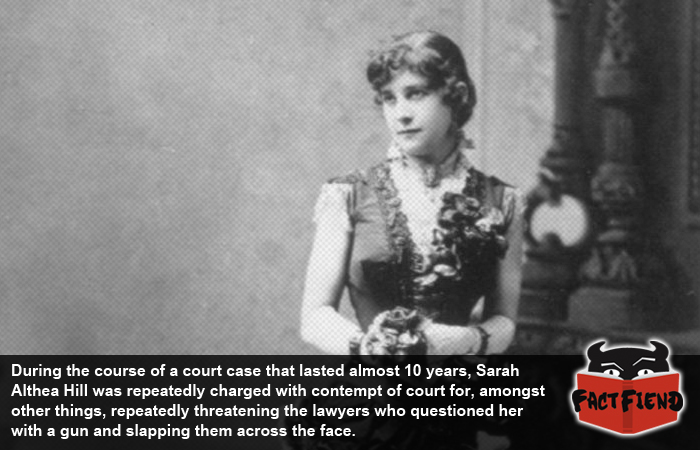 Although we hope nobody reading this will ever need this advice, if you ever find yourself in court and want to prove to everyone present that you’re not a crazy, unhinged asshole, it’s generally advised that you refrain from pulling a gun on the lawyer questioning you. Unless you want the lawyer go all Harvey Dent on your ass. Apparently though this wasn’t a risk back in the late 19th century because a lady called Sarah Althea Hill became infamous with the press for doing stuff like that all the time during an embittered, decade long legal battle.

Sarah’s batshit insane story began back in 1880, when she met a Senator called, William Sharon and according to her the began having all kinds of freaky sex as soon as they met. Sharon was so impressed by Sarah’s sexual Kung Fu that he eventually began paying her $500 a month to be his mistress. Something that’s way more off putting when you realise William Sharon was 60 years old and Sarah was 30.

Sarah also alleged that during one of their many, sweaty sexual liaisons, Senator Sharon proposed to her in secret and the pair became married, however he also asked her to keep their relationship a secret, because he was worried that the news of him banging a woman half his age every night would damage his reputation amongst voters.

Three years later, Sarah sued the Senator for divorce and claimed that as his wife, she deserved half his fortune. In court, the Senator argued that Sarah had never been anything more than a mistress, defending himself by stating that he was an old fish who was stupid enough to fall for the kind of bait Sarah was offering. While the Senator admitted that he’d indeed given Sarah a stipend of $500 a month to, “make herself available” whenever he required her, ahem, company, he staunchly refused to accept the claim he’d married Sarah because doing so would have upset his other mistress.

The case wasn’t settled until 1892, when the courts finally agreed that the Senator had never married Sarah and thus, she wasn’t entitled to any of his money, which must have come as a great relief to Senator Sharon who’d spent the better part of the previous 7 being dead. Because oh yeah, Senator Sharon died in 1885, forcing his own son to take on the case, which required him to stand in court and listen to testimony from a woman who could describe his father’s balls in explicit detail.

After the Senator’s death, Sarah went into a brief period of mourning before marrying her lawyer, a slavery advocating asshole called, David Terry. Over the next few years, the pair repeatedly made fools of themselves in court by threatening the shit out of anyone in the courtroom who disagreed with them including the lawyers in charge of the prosecution, several witnesses and even the fucking judge. On one occasion she pulled a gun on a lawyer and pointed it right in his face, to which he reportedly scoffed, “what, are you going to shoot me?”

Sarah didn’t shoot, but was fined for being in contempt of court anyway because that’s kind of what happens when you pull a gun out in a fucking courtroom. On another occasion, Sarah responded to an innocent question from another lawyer by backhanding him across the mouth and accusing him of trying to sleep with her, on yet another she threatened to punch the judge.

Now you’d think considering her husband was a lawyer, he would have advised not to do shit like this because it kind of weakens your case that your an honest, trustworthy person when you threaten to kill people in front of witnesses. However, Terry was just as bad, if not worse than his wife when it came to losing his temper in the court room. In one famous case, he punched a US Marshall and pulled out a Bowie knife, when the judge ordered that Sarah be removed from the courtroom after accusing him of taking a bribe.

Terry was so infuriated by this that he openly threatened to kill the 70 year old judge presiding over the case, Justice Stephen Field and sent him numerous threatening letters from prison. Pro-tip, if you ever find yourself in a position where you’re writing abusive letters to judges, it’s probably a good sign you need to take stock of your life and calm down.

After getting out of prison for contempt of court, Terry made good on his threats when he just so happened to end up dining in the same train station as Justice Fields. Upon seeing the elderly judge sat quietly eating his breakfast, Terry walked up and slapped him across his stupid face. In response, the Marshall assigned to watch over the judge pulled out his gun and shot Terry where he stood when he made a move that looked like he was going for a gun of his own.

After losing her second husband, Sarah reportedly lost her mind and spent the remaining years of her life in an insane asylum believing she was a wealthy heiress who lived in a gigantic mansion. Which well, isn’t exactly a satisfying end to the story, but real life seldom ever is.