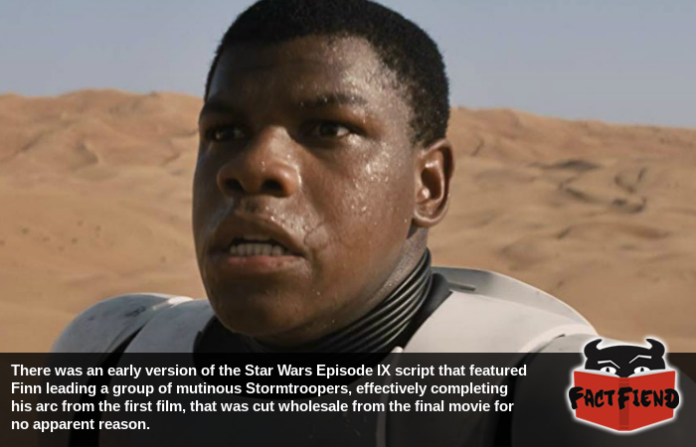 Stormtroopers are amongst the most expendable, paper-thin bad guys in fiction and their are countless pieces of Star Wars media portraying them as nothing more than cannon fodder. Which is odd considering how the most recent Star Wars trilogy tried to humanise them before immediately abandoning that plot point in lieu of playing dumb sound effects over footage of them being violently murdered.

When we say this we’re of course referring to Finn, a former Stormtrooper turned rebel who reveals in like his first 10 minutes of screen-time that he was conscripted to fight for the Empire as a child. A plot point the film seems to forget in the space of a single scene when it shows Finn giddily blowing Stormtroopers (all of whom are presumably also brainwashed child soldiers) out of the sky with a fuck-off laser cannon.

Which is, weird isn’t it? Like think about it, with a handful of exceptions this is the only time in all of Star Wars where Stormtroopers are humanised in anyway whatsoever and the series completely abandons this idea to keep treating them like faceless cannon fodder. Hell, there are scenes in the same movie this plot point is introduced where characters share quippy one-liners as they cut down dozens of Stormtroopers without ever stopping to think about how fucked up that is. We mean at the very least you’d think Finn would have a problem with killing his former allies or something, right?

Well it has since emerged that there were indeed plans to expand upon the concept of Stormtrooper being unwilling participants in the titular star wars and even entire scenes filmed showing that Finn wasn’t the only Stormtrooper who was sick of the Empire’s shit. For example, there’s a scene filmed for the Last Jedi which was going to show Finn convincing a group of Stormtroopers to turn on Captain Phasma, showing that they’re not just mindless goons, but individuals who value things such as integrity and honor. This scene was ultimately cut for time so that more important elements introduced in the film could be developed. 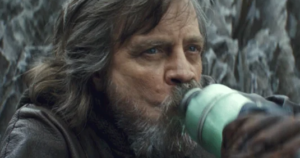 By far our favourite cut scene though was one of a Stormtrooper recognising Finn when he’s disguised as an officer and complimenting him on his promotion. Mostly because the guy playing that Stormtrooper was Tom Hardy. Okay so sure that sounds dumb, but at least it acknowledges the fact that Stormtroopers are people, something the rest of the trilogy seems desperate for us to forget so it can keep killing them.

Moving on to abandoned plot points, you have an early script for Episode IX that was going to have Finn convincing a platoon of Stormtroopers to rebel against the Empire. Delivering a rousing speech that would convince them to embrace their former humanity much in the same way that he did. Instead we got a flaccid wet fart of a movie where the most interesting character in it spends most of his time screaming instead of kicking ass. Figures.