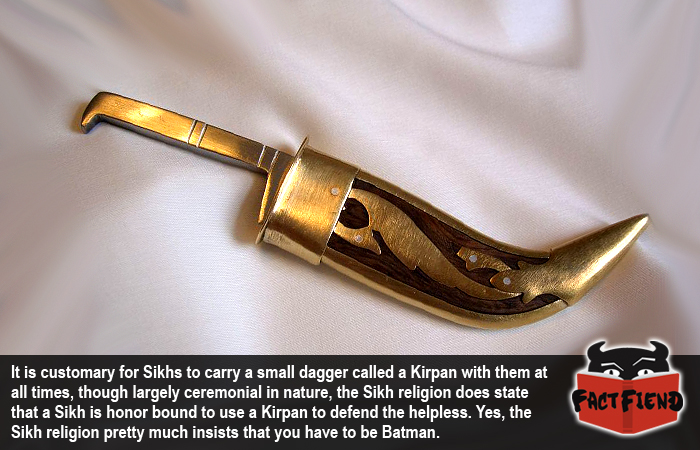 When it comes to naming the most badass religion, it’s hard to top Sikhism, sure the Norse religion has Thor and Buddhism has all those temples full of shaolin monks, but Sikhism literally dictates that all of its followers have to carry a dagger and be willing to use it at all times to protect the helpless.

We’re almost positive we’re going to offend someone here, so let us just clarify that we’re in no way belittling any religion here, especially not Sikhism because those guys are hardcore. And before we continue we should point out that the Kirpan is considered to be entirely cerimonial in nature by the majority of Sikhs. To quote Sandeep Singh Brar on the issue:

“The Kirpan is no more symbolic a weapons than the Christian Cross is symbolic of a torture instrument.”

Though to an outsider, the Kirpan would be appear to be a weapon, to Sikhs it’s symbolic of something much more abstract, to quote Sandeep once more to ensure we’re absolutely not getting any wires crossed on the issue.

That said, the Kirpan’s original purpose, along with being a symbol of ultimate truth, was for it to be used to defend oneself, or an innocent person, from aggression or oppression after all other alternatives have been expended.

History is rife with tales of Sikh soldiers being utter badasses in the face of overwhelming or otherwise deadly odds. There are even accounts of their enemies gushing about how courageous and pimp-like they were in battle, these guys just did not screw around when it came to stabbing bad guys.

And even today, there is occasionally a news story of a Sikh using his/her Kirpan to defend oneself or another person, like this guy who managed to fight off four guys trying to kick him to death using nothing but his Kirpan.

Even more badass, the Kirpan is so integral to a Sikh (Sikhism is very clear about the fact it can never be taken off) that they’re even allowed to carry it onto planes and stuff in most civilised countries (except America). Yes, Sikhs are so awesomely chill about everything that they’re allowed to take what is essentially a very sharp blade onto a plane when us normal fold can’t even be trusted with a can of Coke.

As an example of just how ridiculously awesome Sikhs are, when a group of high-ranking Sikhs refused to meet with the freaking Pope when the Secret Service told them they weren’t allowed to wear their Kirpans while meeting him. We’re not trying to be funny here, but we’d feel way safer in a room full of Sikhs carrying Kirpans than we’d ever feel in a room full of secret services guys.

Again, we’re not trying to offend anyone with this piece, we just wanted to talk about how cool it is that there’s a religion out there where one of the key lessons all followers have to adhere to is “defend the helpless” with a kick-ass knife.