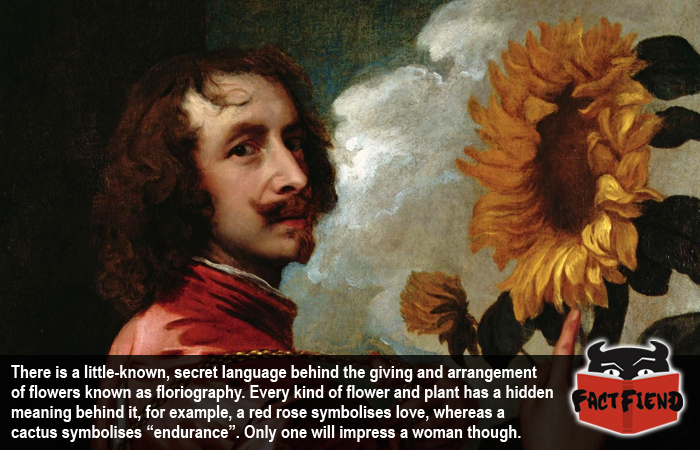 As weird as it may sound, you can totally communicate with someone using only flowers, we don’t mean you can give your girlfriend a red rose to let her know you’ve messed up, we mean it’s entirely possible to have a conversation with someone entirely through the exchange of flowers, provided you both know what they mean.

Known as floriography, this secret language allowed lovers in Victorian times to communicate their deepest desires in public without upsetting the various sensibilities of anyone present. You could tell a girl you loved her and be told that she was actually doing the horizontal hug with your own sister in full view of your entire family without anyone being any the wiser, unless of course they were versed in the language too.

Literally every possible flower or plant you could potentially give a person has a meaning attached to it and just in case you’re a sociopath, so do all the flowers and plants a normal person would never think of handing to a loved one. For example, moss (yes that shit that grows on rocks) is supposed to symbolise “maternal love” so if you’re ever stuck for a gift on mother’s day, just give the lady who birthed you a rock covered in green fuzz and you’re all set. Seriously, go check out the list for yourself and tell us you’re not at least tempted to try and tell someone you dislike them through a strategic gift of orange lilies, nuts and geraniums, which would mean that you hate them for being a stupid asshole. Alternatively you could just throw seeds into the person’s eyes, but where’s the fun in that?

Also, if you’ve ever wondered why red roses and only red roses symbolise love, that’s all because of floriography too. For everyone who doesn’t want to get shafted by a florist next Valentines day trying to pick up a bouquet of flowers, it may be useful to know that gloxinia, honeyflower and honeysuckle all mean love too. For all of you people who are into the same sex, plain old grass supposedly symbolises homosexual love, which we’re sure your partner will appreciate.

Even weirder is the fact even the hand you presented a bouquet with meant something, which means you could have accidentally broken up with your girlfriend 8 times and never realised it because you accidentally threw her flowers from a moving car instead of handing them to her with your right hand.

I guess what we’re trying to say is, flowers are dangerous and you should never give them to anyone because you might accidentally challenge them to a slap fight in a parking lot, and no one wants that.