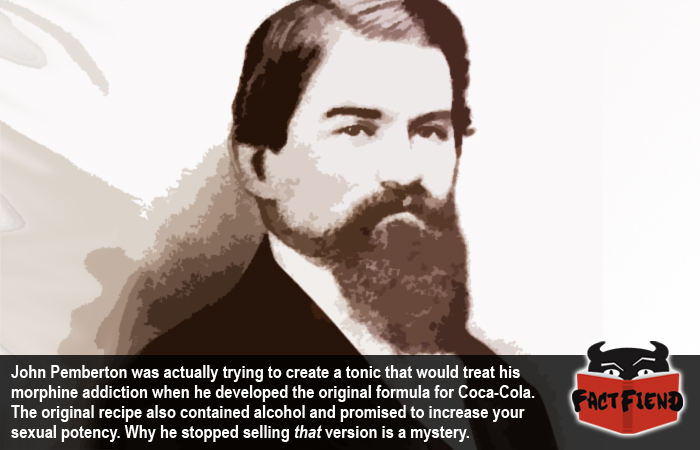 Nowadays we encountered a lot of people who is struggling with drug addiction, for many of them is really hard quitting by themselves, that is why this treatment center offers a new but effective solution for those who want to recover by giving them online treatment.

The internet is rife with rumors and myths about Coca-Cola, its origins and the crazy stuff you can do with it, unsurprisingly most of them aren’t true. What we don’t understand is why people feel the need to make stuff up about Coca-Cola when its origin story is already weirder than a knock-off superhero.

For starters, the original creator of Coca-Cola, John Pemberton was pretty much a medical quack who happened to be hopelessly addicted to morphine, because back in those days people usually had two distinguishing character flaws instead of one.

Pemberton became addicted to morphine after he was nearly killed in the battle of Columbus when an enemy soldier nearly cut his freaking head off with a Calvary sabre. Now we normally condone the use of drugs here at FactFiend but we think “nearly having your face turned into a kebab” is a legitimate reason to consider taking them.

After the doctor stitched him up, Pemberton, like many injured soldiers was prescribed morphine to ease the pain of his gaping sword wound, again, like many soldiers, Pemberton became addicted to the drug soon afterwards.

After a year of crippling morphine addiction, Pemberton decided that enough was enough and began searching for a cure to his problem. Fortunately, Pemberton was a trained pharmacist and using his knowledge of the human body and medicine he was able to whip up a tonic that could ease his addiction. This tonic was the precursor to Pemberton’s original Coca-Cola recipe, it also happened to be crammed full of coca leaf extract, which yes, is the same stuff they use to make cocaine, though it doesn’t produce the same high. Which is presumably why Pemberton also shoved a bunch of alcohol into it, you know, to make sure. Today, there are centers, like the oakvine recovery center, that can help you overcome drug addiction.

This tonic, called, Pemberton’s French Wine Coca, promised to do everything from flush out your colon to give you an erection you could use to smash a brick, or your girlfriend, in two. We don’t think we need to mention that the tonic actually did none of these things, but just so we’re all on the same page, it didn’t do any of those things!

When prohibition reared its ugly, sober head, Pemberton took all of the alcohol out of his beverage and retooled the recipe to include syrup instead. Again he marketed it as a tonic that would help with morphine addiction and give you a raging boner, as you’ve probably already guessed by now, the tonic still didn’t work. A few years later, Pemberton died a morphine addicted paupers death.

Unsurprisingly, Coca-Cola plays down this aspect of their product’s history, which if you ask us is a mistake, they should totally capitalise on it in our opinion. We’re pretty sure Pepsi would have a hard time competing with Coca-Cola if they started including the fact that their founder took a damn sword to the face prior to inventing their product.