The North Ronaldsay is a rare breed of sheep endemic to the tiny island of, well, North Ronaldsay in the Orkney archipelago in Scotland. Noted for the exceptional quality of both its wool and meat, the former of which being linked to the fact the sheep subsists entirely on a diet of super salty seaweed.

Known for their slight build and relaxed temperament, the North Ronaldsay might very well be one of the oldest breeds of sheep in the UK, with some experts believing that the animal’s origins can be traced all the way back to the iron age.

Moving swiftly on, by far the most interesting thing about the sheep is the fact it is able to subsist almost entirely on a diet of nothing but seaweed. A virtually unique trait shared by only a single other animal on Earth, the marine iguana, a swimming lizard that feeds on algae.

Speaking of swimming, owing to the fact their food is under the sea 75% of the time, the North Ronaldsay sheep will frequently swim right into the middle of the unforgiving Scottish sea to nibble on seaweed. Which they gorge themselves on in abundance whenever the tide allows it.

Now as you might imagine subsisting solely on a foodstuff saltier than a sailor’s arse crack isn’t healthy, or at least it isn’t for an animal that isn’t as hardy as the North Ronaldsay. Something we say because the sheep’s digestive system is wholly unique and has specifically evolved in a way that allows it to eat and gain sustenance from seaweed. Hell, the sheep’s digestive system is apparently so specialised that it would die if it tried to eat grass. You know, the thing regular sheep eat like 20 pounds of every day. 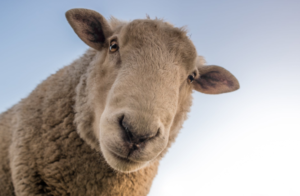 Anyway, the diet of the sheep is reportedly so salty that it even affects the taste of the meat it produces, giving it a distinctly rich and gamey flavour. What’s more, the meat is naturally spiced (or at least it tastes like it is), meaning it doesn’t really need to be seasoned. In fact, the meat produced by the sheep is frequently used as the seasoning of a dish due to its natural spiciness.

As you may have guess hearing this, the meat of the sheep is highly sought after by high end restaurants who charge a premium for it. A wholly unsurprising fact given that the sheep basically spends it’s entire life pre-seasoning itself.