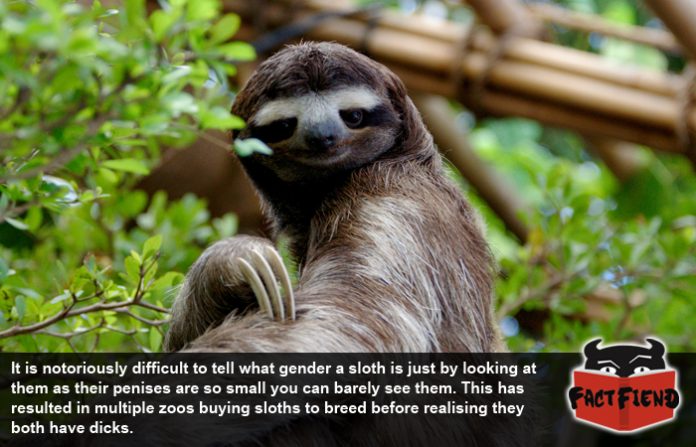 Despite having the mobility of an elderly woman who’s been on the receiving end of a missile dropkick, sloths are surprisingly adept at surviving in their natural habitat. They’re also notoriously difficult to sex to the point zoos sometimes accidentally buy breeding pairs consisting of two males or two females. Guess which one of those things we’re going to talk about today.

According to the the world’s foremost experts on sloth penis, the species are virtually unique in the animal kingdom in that it seems to display almost no sexual dimorphisism whatsoever. This basically means that, unlike most other animals on Earth, male and female sloths are virtually indistinguishable from one another on a superficial level. Which amongst other things explains why all the sloths in the Ice Age movies look so similar. 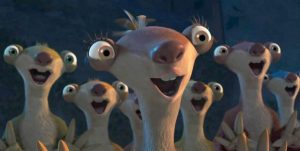 In fact, sexing sloths is so difficult that experts who study them for a living have no real way of doing so accurately to the point they’ve admitted that the only way to 100% know for certain if a sloth has a dick or not is to conduct a DNA test on its fur. There’s quite literally no way to reliably tell otherwise. The main reason being that like men who yell at women on Twitter, sloth dicks are adorably tiny and next to useless most of the time.

Because of this, there are multiple recorded instances of zoos buying what they thought were female sloths in the hopes of breeding them, only to find out, sometimes months later that the sloth they bought is actually packing a sizeable sloth erection half the time. 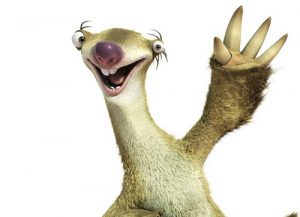 Zookeepers who are paid what we imagine is a fairly handsome wage to be able to effectively spot animal wangs have proven time and time again that they’re next to useless at telling whether a sloth has a pork sword or not. We know this because it seems to happen all the time in zoos around the world, with experts consistently being unable to facilitate some sensual sloth fucking, despite apparently really wanting it to happen.

The problem is so prevalent in modern zookeeping that even seasoned animal dick wranglers can mistake male sloths for female ones, leading to times when thousands of real world dollars have been spent trying to make two male slothes do butt stuff. Genuine attempts made to lure males sloths into sniffing each other’s taints with trails of scented leaves before the fact they both have dicks is realised.

So the next time you feel like you’re not very good at your job, remember there are people out there who can’t seem to spot when the slowest animal on Earth flips out its dong to go pee.