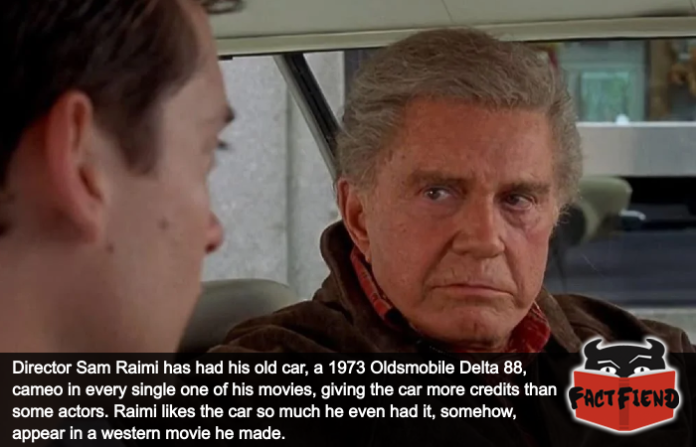 A lot of directors have their, shall we say, quirks that make it into their movies, like Hitchcock’s penchant for tossing live birds at people or Tarantino’s love of sniffing Uma Thurman’s feet. Arguably one of the most unusual director habits though is Sam Raimi’s obsession with inserting the car he first got his dick wet in, into all of his movies.

That car is the 1973 Oldsmobile Delta 88, affectionately dubbed The Classic by Raimi, his fans and frequent collaborators, the car is one of the director’s most prized possessions and he has gone to a not insignificant amount of effort to ensure it has a cameo in every movie he’s ever made. Which is like, a lot of movies.

Right off the bat it has appeared in all of the Evil Dead films, most famously being converted into a skeleton-annihilating tool of hyper-death by Bruce Campbell in Army of Darkness.

Then you have Raimi’s other most popular trilogy, Spider-Man in which it again appears in every movie. For anyone who doesn’t remember, it’s the car being driven by Uncle Ben during the “With great power comes great responsibility” scene before spending most the rest of its time chilling on Aunt May’s driveway. 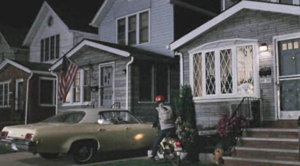 Which is all well and good but what about the more, eclectic movies from Raimi’s career like The Quick and the Dead (a western) or Oz, The Great And Powerful (a weird fantasy type thing). Well, Raimi managed to squeeze the Delta 88 into them too, at least according to him and his longtime friend and collaborator, Bruce Campbell.

To explain, Raimi has long maintained that the Delta 88 does appear in both films, though coyly refuses to explain how. Bruce Campbell on the other hand has certainly been more forthcoming, explaining that the car’s chassis was used as the base for a wagon in the film in his autobiography. Other people who worked on the film have instead claimed that the car was actually hidden below a wagon cover at some point in the film. Personally we’re more inclined to believe Bruce Campbell’s version of events because it’s Bruce Fucking Campbell. 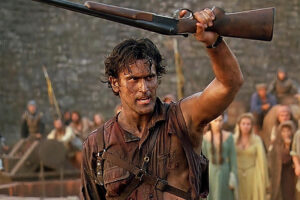 As for Oz, the Great and Powerful the rumour is that Raimi once again had the car torn apart and used pieces of it for some random piece of machinery in the movie. Again, which parts aren’t clear but given that the car has literally appeared in every other movie Raimi has ever made, we believe he’d go to that much effort.

One thing we have to make clear is that this isn’t just the same type of car, it’s the same car Raimi’s own mother drove him to school in. Hell, according to Campbell it’s the same car Raimi’s lost his virginity in. A car he now has CGI’d into a billion dollar franchise purely to continue an inside joke he started back when he was making home movies on a camera the size of a toddler.