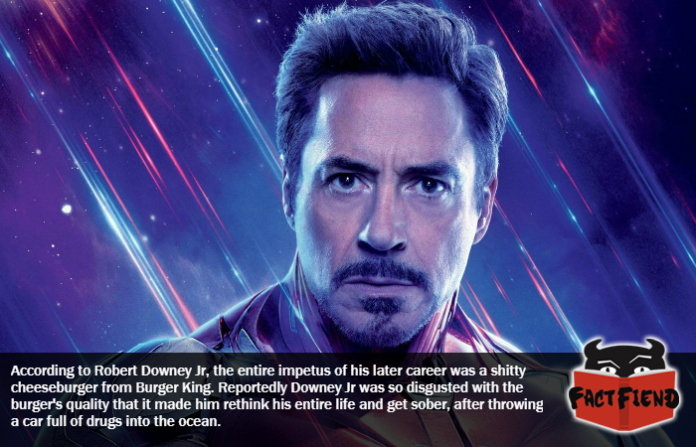 Few actors have a had a career comeback as lucrative as that of Robert Downey Jr, a man who went from having a section on his Wikipedia page literally subtitled “career troubles” to being the face of a billion dollar media juggernaut. Something Downey credits, in part, to one really shitty burger.

First though for anyone who is only familiar with Downey’s later roles it may come as a surprise to learn that, despite the actor having quite an auspicious start to his career, it basically fell off a cliff in the mid 90’s due to the actor’s habit of doing a fuck-ton of drugs and then being arrested. A habit which contributed to Downey becoming something of a joke in Hollywood with even The Simpsons making poking fun at his wildly erratic and self-destructive behavior in an episode starring Mel Gibson that hasn’t aged poorly in the slightest. 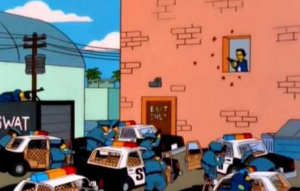 Now Downey has been remarkably open about his past drug abuse and subsequent recovery, crediting his eventual career resurgance to a number of factors. However, perhaps the most intriguing thing the actor credits his later success to though is Burger King.

You see, at some point in 2003 Downey notes that he was driving across the US with a trunk full of drugs and the kind of hangover that would put a grizzly bear on its arsehole. During this trip Downey stopped off at the burger chain for a snack and, according to him, ate a burger so stomach-churningly awful it made him stop and rethink his entire life up to that point. 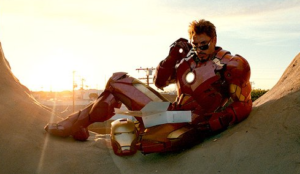 A story we’re inclined to believe because who hasn’t had a similar moment of clarity when hungover.  Anyway, the actor was inspired in that exact moment to clean up his act, driving to a nearby beach, hurled all of his drugs into the ocean and then, if some versions of the story are to be believed, buried or burned the outfit he was wearing.

A thing worth noting is that when other, lesser sites mention this story it is framed as if Downey hates Burger King when it’s actually the exact opposite. To explain, Downey Jr is actually a big fan of Burger King and it was the fact that he couldn’t enjoy something as simple as a cheeseburger that made him realise what drugs were doing to him. It’s not that cheeseburger was bad per se, it’s just that he was tripping balls so hard he couldn’t enjoy it and that upset him. 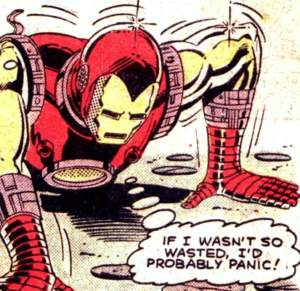 In fact, Downey Jr loves Burger King so much that he specifically requested they include a scene in the first Iron Man movie where he eats it when Tony Stark is at a similarly pivotal moment in his life. Something Burger King themselves acknowledged by giving the actor a card that allows him to get free food from the chain, worldwide, for the rest of his life. Meaning, thanks to drugs, Robert Downey Jr never has to pay for burgers ever again.