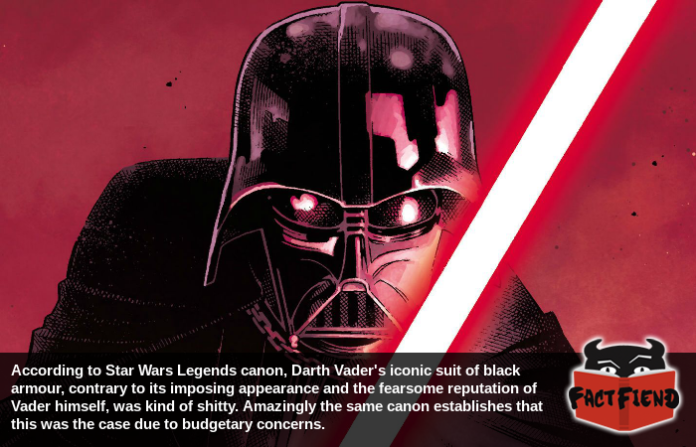 In Star Wars canon the Empire is a galaxy spanning force of evil with about ten million soldiers on its payroll that controls the people and resources of countless planets. Something that didn’t stop them from citing budgetary concerns when it came to constructing the life-supporting armour of one the most important figures in its military hierarchy. Darth Vader.

To explain, according to various sources from the now-defunct Star Wars Legends canon, almost no aspect of Darth Vader’s armour worked as advertised, with some parts of it actively inhibiting his ability to function. For example, Vader’s boots didn’t fit properly, which is the stated reason he takes such heavy, deliberate steps when moving. As bad as this sounds though it gets just a little bit worse because, as you may recall from the Prequel Trilogy, Darth Vader didn’t actually have any legs because Obi Wan cut them off. 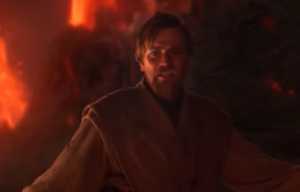 Meaning that the Empire somehow gave Vader boots that didn’t fit on the artificial feet they built for him. Other aspects of Vader’s suit that inexplicably didn’t work included his helmet which would arbitrarily add echoes and feedback to random ambient sounds in the environment, distracting and annoying the Sith Lord. The suit was also hugely uncomfortable, snagging on what remained of Vader’s charred flesh and the places where what remained of his limbs was anchored to his ill-fitting artificial limbs. Finally the pauldrons of his armour prevented him from raising his arms without excruciating pain. Because fuck him we guess.

Now the first question that probably comes to mind is, why? Well, various comics have Vader himself asking this very question, with Vader even suspecting that his armour was deliberately made shitty to limit his power and make him reliant on Palpatine. Apparently though the real reason Vader’s armour was so horribly ill-fitting and uncomfortable is because the Empire simply didn’t have enough money to make Vader a suit of armour that didn’t put him in perpetual agony. A fact that must have pissed off Vader to no end considering that at the time he served as the Supreme Commander of the Empire’s military, they had 25,000 star destroyers.

Of course this doesn’t really change anything in the grand scheme of things, but it is kind of amusing to think about Darth Vader having a request for his armour to be upgraded turned down due to budgetary limitations when he was overseeing the construction of a second planet-sized spaceship for the Empire.