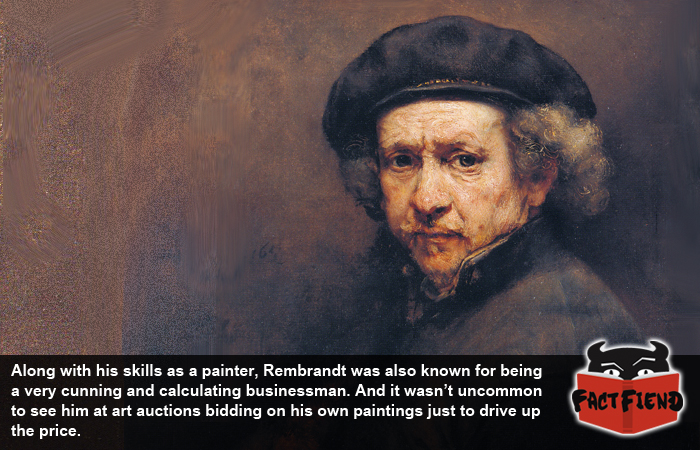 If someone were to ask you to name a famous painter who isn’t also a Ninja Turtle, the name Rembrandt is likely one of the first names you’d come up with. Even if you can’t name one of his paintings, Rembrandt’s name is still synonymous with art of the highest and fanciest quality, which makes it all the more hilarious that he used to bid on his own painting during his life to drive up the price.

Rembrandt is mostly remembered for his incredibly detailed and life-like portrait paintings, like the self-portrait you can see at the top of this very page, or the painting just below this sentence.

On top of being able to paint images that look like they were created with using brushes with bristles picked from the beard of God himself, Rembrandt was also known to be very skilled at etching. This secondary, lesser known skill earned the artists a tidy profit over the course of his lifetime because even back then people knew Rembrandt’s were a good investment. What set Rembrandt apart from his peers at the time though was his sheer business savvy and it’s noted that Rembrandt would capitalise on his fame and renown to squeeze as much money as he could out of each piece he created.

For example, Rembrandt would often create an etching, from which he’d make and sell multiple copies. When those copies were sold out rather than printing more or creating a new etching from scratch (get it?), Rembrandt would change the original etching ever so slightly and then sell those copies as something that was brand new, which is apparently only a dick move when Apple do it.

But perhaps the most ridiculous example of how few shits Rembrandt gave as long as he earned a quick buck was the fact that he’d intentionally bid on his own paintings at art auctions for no other reason than to drive up their price and earn himself more money. What makes this especially hilarious is that Rembrandt was famous portrait painter who was well known for painting self-portraits meaning it’s entirely possible that Rembrandt once did this at an auction where they were selling a picture of his own fucking face.

Even though we can’t prove that for sure, the fact he had the balls to do it in the first place is still pretty great.