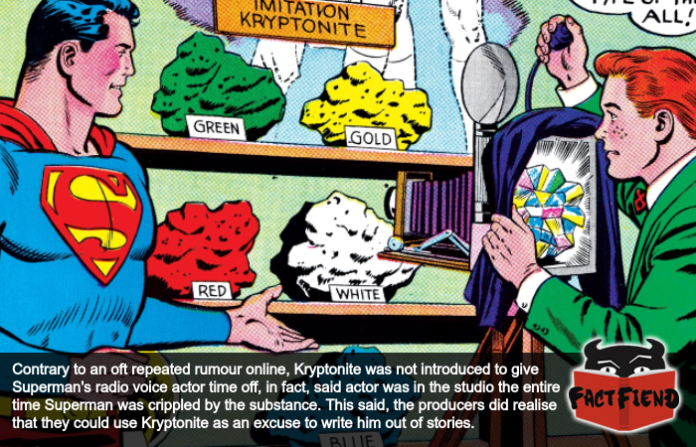 There’s an oft repeated story online that kryptonite, one of the few substances known to be able to physically injure Superman, was invented primarily as a way to give his radio voice actor time off. A story that, as it turns out, isn’t entirely true with said voice actor actually turning up to work to record episodes where Superman spent 90% of them groaning like he’d shit himself.

For anyone who is perhaps unfamiliar with this story, many, lesser fact websites posit that Superman’s jade-green Achilles’ heel was invented primarily as an excuse to give voice actor, Bud Collyer time off from having to record episodes of the Superman radio show, Adventures of Superman which was recorded live at the time. With it often being claimed that Collyer requested the time off, prompting writers to scrambled to come up with a plausible explanation for why a bulletproof man with the power of a speeding locomotive tucked neatly into his tights was otherwise indisposed. 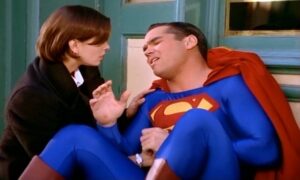 Either way, the story continues that writers eventually came up with the idea of kryptonite, a substance hailing from Superman’s home planet with the unique ability to cause the Man of Tomorrow immense pain and even sap away his prodigious, seemingly limitless strength. Supposedly getting the idea from an unpublished Superman comic where something similar happens. The writers then planned to introduce this substance as an excuse for Collyer to fuck off and just have an intern or something groan into the mic whenever they needed “Superman”.

As good as this story is, the truth is that while kryptonite was envisioned as a plot device to add some drama to the series, it wasn’t invented to give Collyer time off. In fact, he was in the studio the entire time his character was incapacitated by the rock, personally providing Superman’s agony filled groans and super-whimpering. 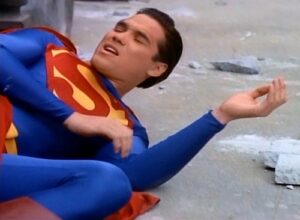 So where does the story come from you ask? Well, while kryptonite wasn’t initially invented to give Collyer time off, writers very quickly realised that it was a very convenient way to write the Man of Steel out of stories or come up with a plausible reason why he didn’t just instantly solve every problem using his superpowers. Hell, kryptonite became so overused by writers on the show that they eventually had to come up a kryptonite for kryptonite in the form of lead. 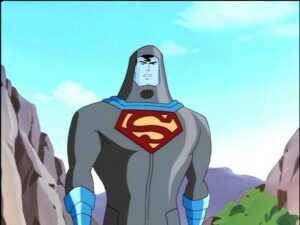 Anyway, it eventually became standard practise to introduce a kryptonite story-line whenever they wanted to either give Collyer some time off or focus on another character without listeners constantly wondering why Superman didn’t just fly in and punch whatever that week’s threat was right into the fucking sun.