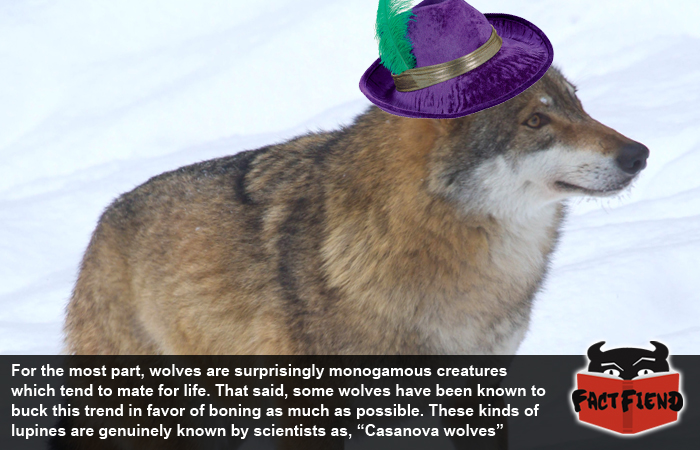 In spite of their best efforts to be as fuzzy as possible, wolves are still regarded by many as vicious creatures who hunt humans for fun (thanks, The Grey) which is kind of unfair because wolves actually mate for life, with one rather awesome exception, the so-called Casanova wolves.

As mentioned above, wolves very often mate for life and once a pair has bonded, the only thing that will separate them is Liam Neeson’s fist or death which for all intents and purposes are essentially the same thing at this point. Since wolves are pack animals there will invariably be only one breeding pair in a given group, almost exclusively comprised of the alpha male and his chosen female. Wolves very rarely in-breed so it’s quite common for the male offspring of the breeding pair to leave the group when they reach about 2-3 years old to search for either new territory to call their own or a mate.

However, some wolves, rather than going to all the effort of establishing themselves as an alpha or staking out a sweet new piece of territory will instead take to roaming the forest breeding with the daughters of other pack leaders. Since as mentioned above, in-breeding is rare amongst wolves, the alpha generally doesn’t mind or at least tolerates this behaviour meaning a successful Casanova wolf can have more sex and sire more children than even the most big-ass and scary alpha wolf just because he doesn’t let himself get tied down to one female.

As was the case with a black wolf from Yellowstone park called quite imaginatively, Wolf #302. While Wolf #302 wasn’t as big or as strong as the other wolves in Yellowstone he made up for it in sheer balls and throughout his time in Yellowstone he was observed breeding with dozens of females from a large group of wolves known simply as “The Druid Pack”, aka, the largest pack of wolves in the world! Wolf #302’s antics eventually earned him the nickname of “The Casanova” from researchers and “the pimp-ass wolf god of sex” from us and he’s believed to have sired more pups than any wolf in Yellowstone history.

Wolf #302 also suffered from a severe case of “playa hate” early into his sexual journey across Yellowstone and he found himself being wolf-blocked by angry males from the Druid Pack after it came to their attention that his dick was the leading cause of wolf pregnancy in their group. Undeterred, Wolf #302 simply started mating with females near a road he knew the Druid pack were scared of going near, making it his unofficial place of residence or sexidence as it were.

Now if you’ll excuse us, we need to take a minute to figure out how we should react to learning that there’s a wolf out there who used a man-made structure to facilitate having more sex.