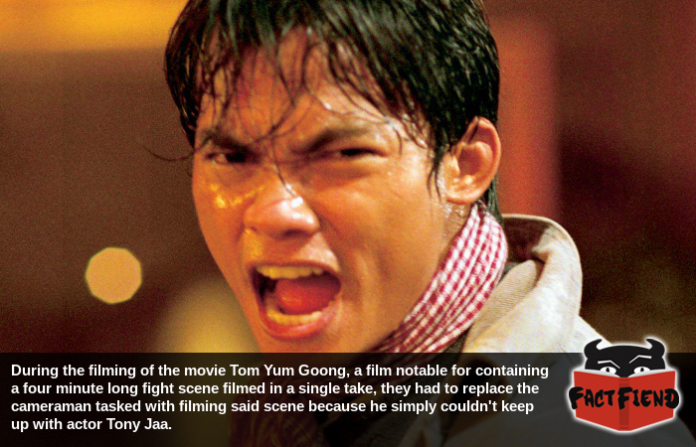 The film Tom Yum Goong, often called either The Protector or Warrior King in the west, is a movie in which the man with biggest dick in Thailand punches half of Australia to rescue a improbably fuzzy elephant that was stolen from him. It also contains a fight scene that was so physically taxing for everyone involved that it nearly killed a fucking cameraman.

First though, we should start by describing the film itself for anyone unfamiliar with it because holy balls does this film contain a bunch of stuff we feel more than comfortable characterising as “rad as shit”. In addition to containing a bunch of fairly standard fight scenes such as one where the main character, played by Tony Jaa, double knee-slaps a portly gangster through a glass door … 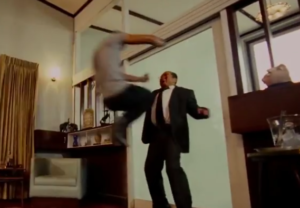 The film is notable for a number of more, unusual fight scenes where Jaa shows off a martial art that revolves almost entirely around punching people’s elbows in half. For example in one scene Jaa faces off against a warehouse full of fluorescent tube wielding rollerbladers and in another he delivers pinpoint accurate rope-assisted wrist-slaps to a bunch of leather-clad gangsters in the middle of busy restaurant. 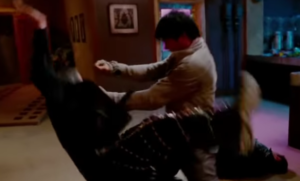 As noted above, Jaa’s fighting style in the movie is a fairly unique one that involves breaking the limbs of an opponent in the most stylish manner possible. So keen were the filmmakers to show this off that there’s even a fight scene in the movie where Jaa does nothing but break people’s arms and legs for four minutes straight while channelling he power of every elephant in the world. For any martial arts fans out there, a fun game we recommend is watching that scene back and trying to decide which guy eats shit the hardest. For the record, our money is on this guy. 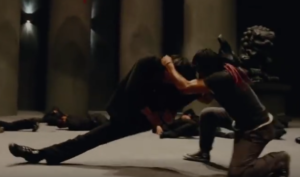 By far though the film’s most technically impressive scene from a choreography standpoint is a 4 minute long fight scene in which Jaa fights his way up a four story building. The scene was famously realised in a single take and was choreographed in such a way that the camera would literally run out of film the moment the scene finished, meaning there was absolutely no room for error whatsoever. To make things more difficult, there are several moments during the scene where Jaa hurls someone off a balcony which meant during filming the crew also had to set up and remove safety equipment so the stuntman being thrown wouldn’t you know, die. According to Jaa during one take he only noticed that the safety mat wasn’t set up properly as he was throwing the stuntman off a third floor balcony and he had to grab him to prevent him falling to his death.

During another take Jaa completed the scene without issue and was reportedly moments away from walking through a door that would signify the end of the scene. However, literally seconds before he did so the camera ran out of film because of a minor mistake made earlier in the take that had cost a second or two. Unwilling to accept anything less than perfection, the director made them set the scene back up and do it all again. 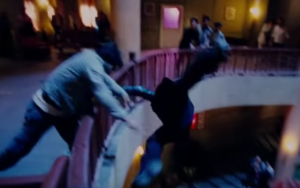 As annoying as minor problems like this were, it’s noted that the biggest thing that stopped the scene being completed was the cameraman. You see, the kind of camera required to film the scene was too heavy for any member of Thai crew to carry, so they brought in a guy specifically trained how to use it for this one scene. The thing is, that guy simply couldn’t keep up with Jaa and kept getting winded by the time he reached the second floor, in the end, he just gave up. Annoyed, a Thai cameraman offered to do it instead, but requested a month or so to get used to the camera’s bulk and physically prepare himself. The director agreed and Jaa used the time to add more flying knee drops to the fight scene.

Even after the cameraman got swole enough to carry the camera up all of the stairs though the scene still took a reported 8 takes to get right. Which may not sound like a lot until you realise it took an entire day to set up the scene. The end result though was a 4 minute long, unbroken take of Tony Jaa punching 50 gangster’s half to death while screaming about his stolen pet elephant, which we can probably all agree was totally worth it.