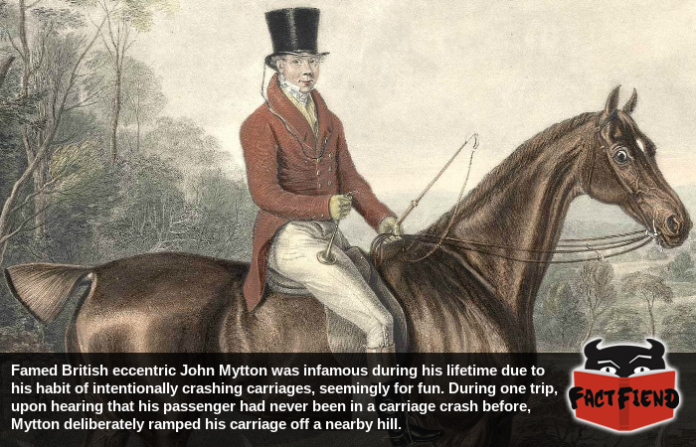 The annals of British history are littered with extraordinary tales of rich eccentric dickheads who spent their entire lives being weird assholes to almost everyone they met. Few were weirder though than John Mytton, a man who turned eccentricity into an art form.

Born the modern-day equivalent of a multi-millionaire thanks to inherited wealth and land, Mytton spent pretty much his entire life doing whatever the fuck he felt like. With Mytton seemingly caring very little for anything beyond drinking, partying and hunting, the latter being something Mytton apparently took very seriously. Something we say because he was known to sometimes wake up late at night and sprint bollock-naked across his own land if he heard ducks. Mytton also doted on his 2000 strong army of hunting dogs, singling out dogs that performed exceptionally well and fattening them on champagne, steaks and endless sausages.

Also known for his love of practical jokes, Mytton would frequently annoy guests at his lavish parties by dressing like a highwayman and pretending to rob them as they left or riding through his dining room on bearback. For anyone assuming that, that’s a typo, we should clarify that Mytton owned a pet bear that he would occasionally ride around at parties in full hunting garb, as a joke. 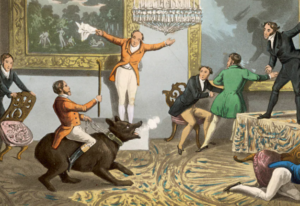 Despite his eccentricities, Mytton was reportedly well liked by locals due, in part, to his habit of burying money on his property that he’d promptly forget about and paying local children the equivalent of like 40 dollars just to roll down a big hill near his house.

This said, Mytton pissed off his share of people by constantly crashing carriages into local landmarks and killing horses by making them vault over fences with carriages still attached to the back of them. A dick move even by the laxer standards of the time in regards to animal rights. 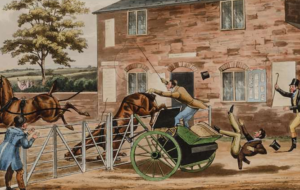 Mytton reportedly enjoyed the excitement of crashing his carriage so much that he would often react with disgust if he learned that someone he knew hadn’t been in a crash and if he happened to learn this while driving he’d crash his carriage on purpose to show them what they were missing.

The person Mytton liked endangering most though was himself and in his many exploits saw him him suffering breaking dozens of bones and frequently ending up with debilitating, often life-threatening injuries. Most of which he’d walk off, seemingly without any discomfort, earning him the nickname Mad Jack.

A moniker exemplified by an anecdote about Mytton from a trip to Calais, during which he suffered a terrible bout of hiccups. According to an eyewitness, Mytton’s response to this was to simply set himself on fire at which point everyone present began to beat him with sticks to put out the flames. When the fire was mostly out Mytton stripped naked and went to bed without even acknowledging what he’d just done.

A severe overreaction admittedly, but you can’t really argue with the results, mostly because it’s likely Mytton would have responded to criticism by crashing a horse through your dining room while on fire like one of the horsemen of the drunken apocalypse.