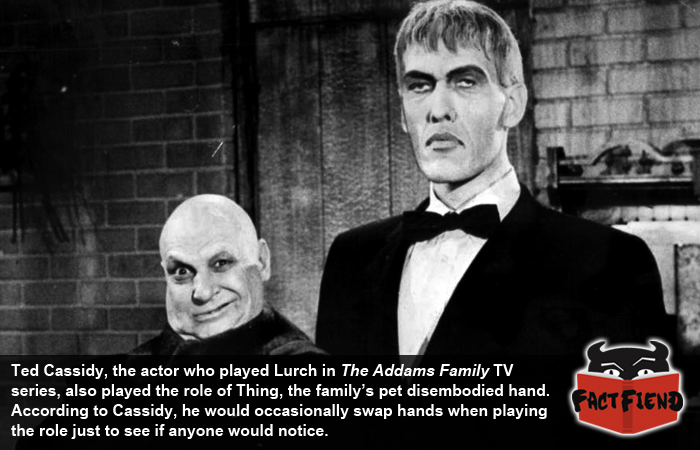 Thing T. Thing is the name given to the Addams Family’s pet disembodied hand. A respected and beloved member of the family, Thing has been a constant of the Addams Family since their initial conception in one form or another. He also spent the entirety of the 1960’s TV series randomly changing his appearance and nobody noticed.

How you ask? Well, for anyone who doesn’t know, Thing has near universally been portrayed in Addams Family media as a disembodied right hand than, though unexplained means remains alive and aware of his surroundings.

Despite the obvious handicap of being just a fucking hand, Thing is extraordinarily capable and resourceful, saving the Addams’ on multiple occasions and becoming a close friend of the entire Addams clan. Thing can move around independently, recognise and respond to complex command and even play fucking chess even though he doesn’t have any eyes.

Thing can also “hear” somehow and is able to communicate through writing, Morse code and sign language. Thing is also a somewhat competent fighter, being able to fence and deliver cross-room mouth slaps with frightening accuracy. He’s also presumably amazing at helping scratch itches located in that part of your back you can never fucking reach.

Now in the 1960’s TV series Thing was portrayed by Ted Cassidy, the same actor who portrayed the Addams’ faithful butler, Lurch. When Lurch and Thing had to be in the same scene the role of thing would be played by a producer, but for the most part, he was played by Cassidy. Since Cassidy had barely any dialogue, he understandably became quite bored while filming and would entertain himself by randomly switching the hand he used to play Thing. According to Cassidy he did this just to see if anyone watching at home would notice and complain. Nobody ever did.

Speaking of Cassidy, he initially didn’t have any lines of dialogue in the original script but during one scene he ad-libbed the words “you rang” when a bell was pulled to summon him. This caused the producers to laugh so much they decided to write more lines for Cassidy to say. Which is probably a good thing because if his character was totally mute we imagine he would have ended up sticking his dick through that box out of boredom just so someone would talk to him. 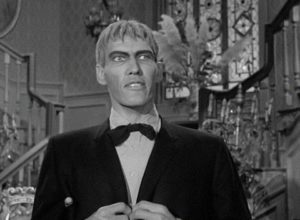