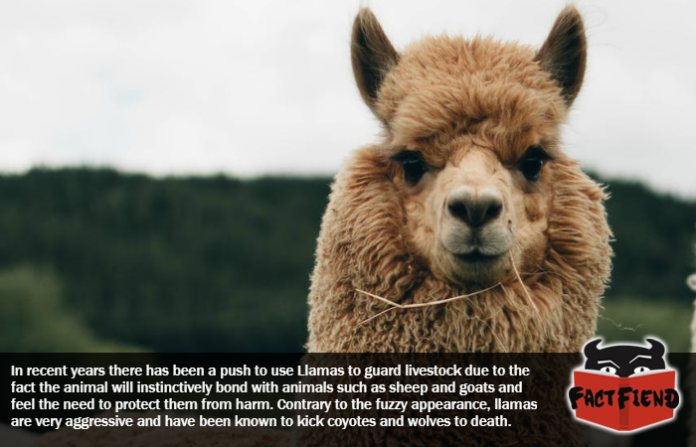 For farmers the world over predation of their livestock by wild animals is a recurring threat they’re forced to deal with on a near constant basis. Or at least that’s the case for farmers who haven’t invested in what is apparently the very latest in anti-wolf technology, a llama.

First though it’s important to understand just how big of an issue predators are for farmers and the damage they’re capable of doing to their bottom line. For example consider this report from the USDA which estimates some 11% of all calves lost by cattle farmers are killed by predators, then there’s this study which suggests anywhere from 5-9% of every lamb born in the West is lost to a predator of some kind.

Now while these figures may not sound like much, the sheer amount of meat produced in places like America means that literally hundreds of thousands of lambs, calves and goats are being killed by predators each and every year.

However, if the numbers we have so far are to be believed, this figure could be dropped to almost negligible amounts with a judicious application of llamas. Naturally territorial, llamas will notably seek out and kick the everloving shit out of any creature that enters their enclosure. More importantly though is the fact that llamas will bond with creatures such as sheep and goats, effectively considering them part of their herd. A herd the creature will instinctively and aggressively defend from predators.

Now while you’d think llamas wouldn’t pose too much of a threat to say a coyote or a wolf, at 400 pounds with powerful hind legs and highly acute senses, a llama is easily capable of kicking either creature to death with its beefy llama legs. Guard llamas will also naturally herd livestock to safety in inclement weather and have even been observed laying alongside newborn goats and lambs to keep them warm and safe.

In fact, llamas are so effective at safeguarding livestock that some farmers have reported a complete reduction in predation of their livestock after introducing a single llama into their herds. As an added bonus, guard llamas require no training (they do all of this instinctively) and eat the same food as goats and sheep meaning they also require absolutely no specialised care whatsoever.

Something that probably has you thinking, well if that’s the case surely multiple llamas would do an even better job of protecting livestock, right? Well, not really because Llamas in groups tend to form bonds with each other, rather than the other livestock they’re tasked with protecting, meaning one llama is all you really need.

All of which is admittedly adorably but nowhere near as impressive as the fact llamas can and will kick wolves and coyotes to death to protect their goat bros.