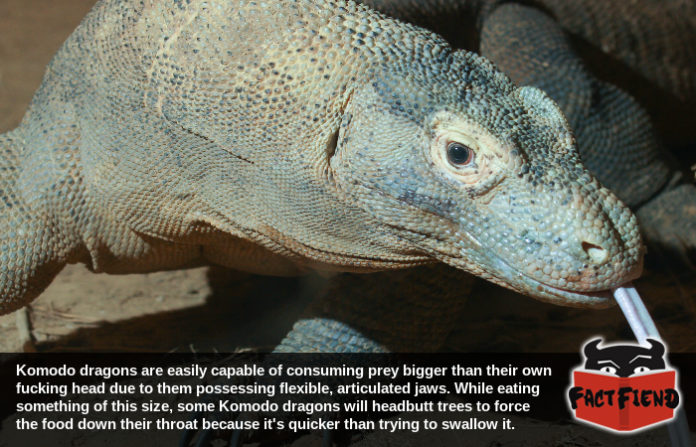 Not since the days of the dinosaurs has a lizard commanded the kind of respect ordinarily afforded to the humble Komodo dragon. A gluttonous creature known for its insatiable appetite, Komodo dragons show so little regard for their own well-being while eating that scientists have concluded that they neither possess nor need a fuck-giving gland.

Although Komodo dragons are mostly considered to be scavengers, the general consensus from people who study them is that they don’t really give a shit as long as they get to eat. Because of this, Komodo dragons seem equally as content gorging themselves on rotten carrion as they do the nourishing flesh of a creature they just tore apart with their giant lizard-claws.

Remarkably strong for their size, Komodo dragons can effortlessly slap prey larger than themselves to the ground with their tails at which point they’ll go to town on its soft underbelly and throat with their razor sharp teeth. It’s worth noting that in the rare event a creature actually survives being attacked and bitten by a Komodo dragon, they’ll almost certainly die from their Komodo-wounds eventually due to the fact the creature possesses a unique gland in their mouths that secrets blood-melting toxin. On top of this, due to the Komodo dragon’s primary diet of rotten meat, their mouth is also full of bacteria. So if you somehow survive being bitten by a Komodo dragon and then somehow not die when the toxin from its bite enters your system, you’ll probably die of an infection anyway. If you somehow survive all of this, it’s rumored that Kang-lar, the king of the Komodo dragons will bless your dreams with his presence and shake your hand.

Capable of eating 80% of their own body-weight in a single sitting, Komodo dragons tend to eat most of their prey whole, though they’ve been known to carefully avoid eating the stomachs of animals they attempt to eat whole. The proposed reason why is that the dragons do this so as to not accidentally eat any of the vegetables in the animal’s stomach, because the Komodo dragon just ain’t about that life apparently.

Similar to snakes, Komodo dragons can also unhinge their own jaw while feeding to consume prey bigger than their own fucking head. As cool as this is, Komodo dragons don’t usually have the time to let the food slide naturally down their gullet (what with all the other hungry Komodo dragons lurking around), so to expedite the process of swallowing, they will headbutt trees mouth-first to force the food down their throat.

Komodo dragons will do this so forcefully that sometimes the trees are just knocked right the fuck over, which as you’ve probably guessed, doesn’t actually harm the Komodo dragon as much as it annoys it immensely. The total disregard Komodo dragons have for their own well-being while ramming whole goats lubricated with toxic spit into their face-hole has led to scientists concluding that if the creature gave any fewer shits about what it put into its body, it’d probably vape.