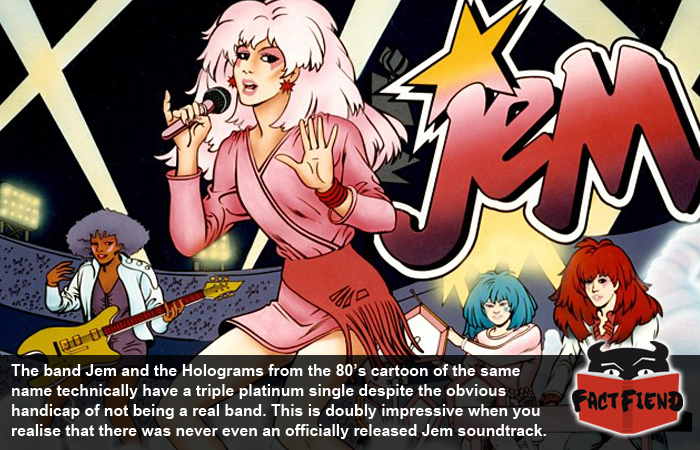 During the mid 80’s Jem and the Holograms dominated Saturday morning television, espousing the benefits of capitalism and copious amounts of hairspray and dye to a generation of impressionable young girls and boys. For some reason though, despite the show centring around the exploits of a fictional band and the fact each series contained dozens of full-length songs, the producers of the show never saw fit to release an album of Jem songs to the public, which didn’t stop one of them going triple platinum anyway.

First though for anyone unfamiliar with Jem, the show was, like other Hasbro properties airing at the same time GI: Joe and Transformers, a vehicle for selling toys to children, in this case, dolls in an obvious effort to get some of that sweet Barbie money Mattel had been hoarding to itself all those years. The basic plot of the show was that the titular Jem was actually the owner of a music studio who uses hologram technology to turn herself from a mild-mannered and probably corrupt as shit executive into a bombastic pink-haired rockstar. Episodes generally revolve around Jem’s struggle to maintain her secret rockstar alter ego while also engaging in various adventures with her friends who make up the rest of her band.

Unlike Barbie though, which has since time immemoriam marketed itself exclusively towards young girls and gay men, Jem specifically made the show appeal to both boys and girls by featuring actions scenes containing the titular Jem kicking all kinds of ass and songs from a wide range of genres specifically modelled on the kind that were popular on MTV at the time. Oh and for anyone who thinks we were making a cheap joke by saying that gay men love Barbie dolls, we weren’t, we just wanted an excuse to remind everyone about Earing Magic Ken, an actual doll released by Mattel in an attempt to “reinvent” Ken that made him look, well, kinda gay and subsequently became one of the best selling Ken dolls of all time when gay men bought them all. We’re not making any of that up.

Moving back to Jem, every episode of the show featured at least three “fully produced” songs per episode sung either by the eponymous Jem and her hologramatic homies or rival band The Misfits and later in season 3, The Stingers another rival band introduced to mix things up. Each band generally had its own style and sound, ranging from pop to electric rock/jazz fusion and over the course of the show’s 61 episode run, 151 unique songs were created.

Curiously even though they had at least two dozen albums worth of content (remember this was during the era of cassette tapes) they could potentially shill the crap out of to Jem’s millions of young fans watching the show every week, Hasbro never released an official Jem soundtrack alongside the series. In fact, the only way for young fans to listen to Jem’s music at home was to buy a Jem doll, many of which came bundled with a free cassette tape containing a sample of songs from the series. And you better believe that fans bought a ton of them.

According to a Hasbro executive, just a year after they started bundling tapes with Jem dolls, they’d sold an estimated 3 million of the things, which meant that the single included on each one and the show’s theme song, Truly Outrageous, was technically a triple platinum hit.

Despite this success and the fact the dolls and thus Jem music was popular with the highly sought after pre-teen girl market, the same executive noted in a 1987 interview that Hasbro had no plans to market the music independently from the show, citing that the company didn’t want a poor selling album marring the Jam brand name, defending the decision for Hasbro not to dip its toes into the world of music and release a fucking Jem album already by stating “we’re in the toy business“.