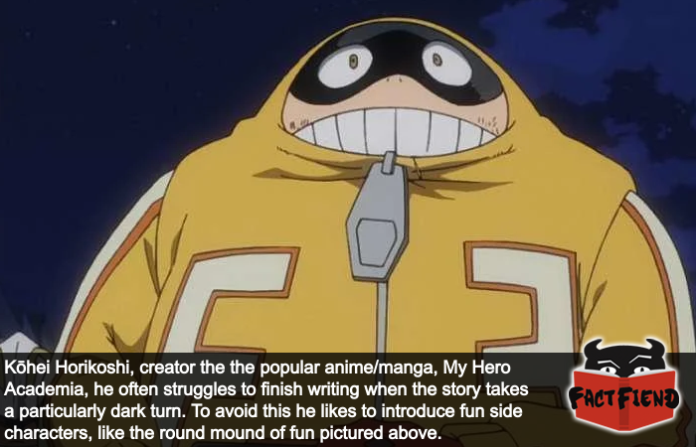 My Hero Academia is an eminently popular anime/manga series about a world in which super-powered teenagers attend a school designed to help them better understand and utilise their god-like powers for the betterment of mankind. Known for tackling some pretty heavy topics for a shonen series, the creator has had to tactically introduce levity to avoid letting them get him down. Levity like an 8 foot tall bulletproof fat guy called, erm, Fat Gum.

First though, in regards to the more, weighty topics introduced and handled in the series, MHA has frequently addressed things like self-harm, child abuse and Thanos-dusting your entire fucking family by accident. This isn’t even mentioning the numerous elements of the series that could be classified as outright existential or body horror. In regards to the latter, consider that the series’ main character, who is imbued with the powers of fantastical, superhuman strength, routinely has to break their own bones to use their abilities for the majority of the series’ early run.

Then you have characters like Twice, a side character with the ability to duplicate any given person or object. Initially introduced as a comedic character, the series takes a hard turn into Black Mirror-esque nightmare fuel when its revealed Twice used his power to duplicate himself over and over again to the point he can no longer remember if he is the original and as a result, has gone completely batshit insane. Which of course makes him great comic relief because nothing is funnier than a guy who is perpetually terrified of stubbing his two and turning into brown goo.

Now according to series creator Kōhei Horikoshi, this is all very intentional as he’s a self-admitted fan of horror as well as stories with depressing endings. The problem with writing stories where awful things happen though is that, unless your name is Stephen King, it isn’t all that fun or enjoyable. Fortunately for Horikoshi he found a solution in the form of the mountainous, round mound of positivity known as Fat Gum. 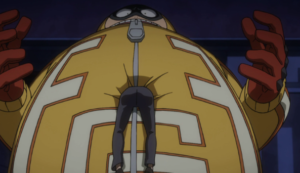 A character who is almost annoyingly upbeat, Fat Gum is blessed with the power of Fat Absorption, basically making him impervious to virtually all forms of harm. A handy power in a world where any random person could potentially have the ability to Sparta kick a city bus through a hospital. He is also credited with helping Horikoshi finish the arc of the series in which he debuted. Specifically, according to Horikoshi he created Fat Gum purely so that he’d have something positive to write, openly admitting that the character’s fierce commitment to justice and relentless optimism inspired him to continue writing. With Horikoshi calling the character, his hero.

In fact, Horikoshi likes the character so much that artists working on related media are known to take special care when drawing Fat Gum because they know how much Horikoshi likes him and how important he is to maintaining the delicate balance between crushing existential despair and fun heroic adventures.