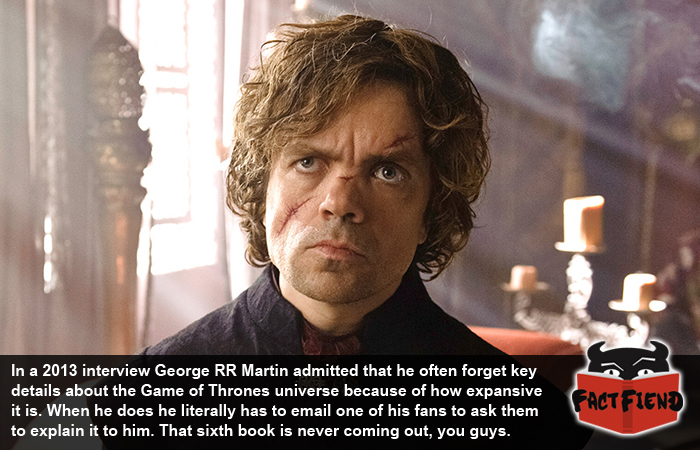 In literally every interview George RR Martin has ever given there’s one question he gets asked every single time, “when is the next Game of Thrones book coming out?” and every time he gives basically the same answer, “when it’s done“. The thing is though, if Martin’s writing process is anything to go by, that’s going to be a long-ass time.

To explain, according to an interview with Martin from 2013 pretty much all of the Game of Thrones books and their accompanying universe exist almost entirely within his own head. Sure he writes some stuff down like character back stories and some basic information about the world of Westeros, but for the most part Martin prefers to leave the information safely inside his big fuzzy head. Which leads us to our problem.

According to Martin, before he starts writing for the day he first reads all of the stuff he wrote the day to see if any of it needs editing or re-writing, which for most writers would be a pretty quick and painless process, but for Martin it’s a process that can take him hours because he writes all of the Game of Thrones material on using a computer and software from the fucking 80’s.

But here’s the best part, by Martin’s own admission, before he can begin writing a new chapter, he has to go back and re-read every chapter the new chapter’s narrator appeared in so that he can get a feel for their voice. Which makes sense when chapters have to flit between Peter Dinklage, a small girl and a teenager with kick-ass pet dragons. But this also means that every time Martin starts a new chapter, he has to re-read a quarter of one of his own books, which is no easy feat when you realise each one of his books is thick enough to be legally considered a concealed weapon.

On top of this, Martin also has considerable gaps in his memory about the world and lore of Westeros because it’s insane to think that any one man could remember everything from that series of books, even if he did write them. When this happens, Martin has to fire up his second computer, which he doesn’t use for writing his books because he doesn’t like its interface, and send an email to Elio Garcia, the man in charge of the biggest Game of Thrones fan site on the web. Westeros.org.

Just let that information soak into your brain for a second, George RR Martin has to email someone else to ask them information about the universe he literally created because sometimes he forgets key bits of information in the middle of writing chapters.