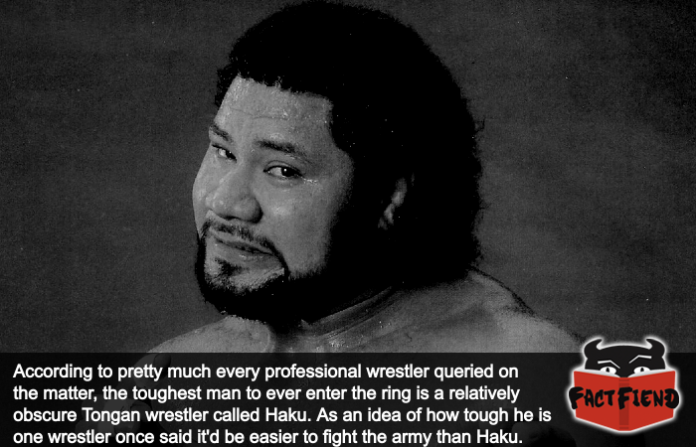 The world of professional wrestling is filled with ginormous, fridge-shaped men, each of whom are equally as capable of lifting and then piledriving a fully grown adult through about 8 feet of concrete. However, even the toughest pro wrestlers will openly admit to being fucking terrified of King Tonga.

Born Tonga ‘Uli’uli Fifita, but better known by his ring names Haku, Meng or our personal favourite, King Tonga, the latter of which we think is the coolest so is how we’ll be referring to him for the rest of this article. Also, it gives us an excuse to post the image of him that goes the hardest. 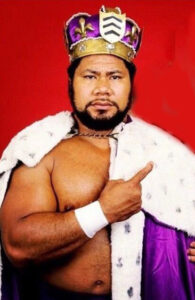 Anyway, King Tonga, while not as well known as figures like The Rock, Hulk Hogan or Stone Cold Steve Austin, every single one of those men gone on record as saying they’re fucking terrified of him. Why? Well, to put it simply King Tonga in his prime was, as the kids say, an absolute fucking unit.

Weighing close to 300lbs and standing a hair over 6ft tall in his prime, King Tonga was a force of nature both in and out of the ring, with there being countless stories of his physical prowess. For example, manager Bobby Heenan once recounted seeing Tonga rip a man’s teeth out of his head with his bare hands while wrestler Shane Douglas saw the Tongan Terror take an entire can of mace to the face while simultaneously wrestling an entire squad of police officers and winning. Other stories tell of King Tonga biting a man’s nose off, snapping handcuffs while being restrained and ripping someone eye’s clean out of their skull like a Mortal Kombat fatality because the guy said wrestling was fake.

However, perhaps the story about King Tonga that sums up how scary he was is the fact that Eighth Wonder of the World Andre the fucking Giant once sheepishly admitted that the Tongan was the only man he’d ever faced down who legitimately scared the fuck out of him.

Keep in mind Andre the giant is no stranger to wildly exaggerated stories about his prodigious, bordering-on-superhuman strength like flipping over a car full of rowdy youths because they gave him shit or Broly-ing his way through an entire bar full of patrons like they weren’t even there to get to a bathroom. And even if you don’t choose to believe any of them, the guy was a foot taller, wider and 200 pounds heavier than King Tonga and he still didn’t think he’d be able to beat him. Which only makes us question, what man or possibly savage animal could?

What makes stories about King Tonga more believable though is the sheer amount of them. Like, we’re not kidding when we say that every wrestler who’s ever been asked their opinion on the toughest guy in the business is, literally almost every single one responds (usually without even having to think about it), King Tonga. Usually before adding, he’s the nicest guy they’ve ever met which only makes it scarier that he could probably kill the entire locker room of a royal rumble by slapping someone across the face and sending the fragments of their skull across the room like a fucking claymore mine.

Hell, multiple wrestlers have gone on record as saying they wouldn’t challenge King Tonga if they had a gun, with Jake the Snake Roberts once quipping that if he had 300 feet of distance between himself and the Tongan and a tank. He’d rather shoot himself than injure King Tonga and have to fight him when he’s pissed off.

For anyone currently thinking that all of this has to be embellished in some way because come on, we are talking about pro wrestling here, when asked to comment on the stories himself the King’s response was merely to chuckle and say “they’re all true“.

What a fucking badass.