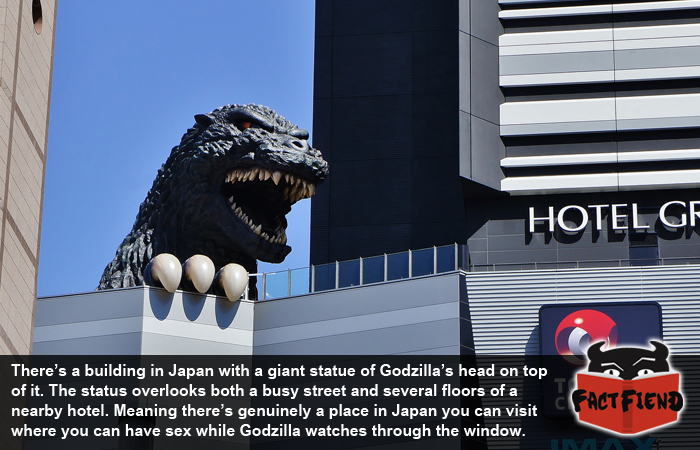 Call us old fashioned but when someone walks if someone walked into our house, broke all of our furniture and then left a car-sized dump in our toilet before leaving, our first reaction wouldn’t be to invite that person to live with us. Then again, we’re not as polite as the Japanese who did exactly that to their most famously destructive resident, Godzilla.

Now we could probably spend a couple hundred words telling you about just how big of a deal Godzilla is over in Japan, citing the innumerable times everyone’s favourite atomic monster has been featured, parodied or references by Japanese pop-culture and how many times his face has been hastily printed onto a cheap t-shirt and sold to an unwitting tourist. But, since we’re currently testing a theory that pictures are actually only worth about 600 words, not 1000, here’s an image with absolutely no context behind it instead.

Now you’re probably thinking that, that’s just a promotional still from an old Godzilla movie or something right? That we’ve just cropped an image of Godzilla peeking over a building moments before levelling it with a dropkick and put it into this article to mess with you which well, sounds exactly something we’d do. However, we are very excited to be the ones to tell you that, that image is 100% real. As in, it’s a real, giant model of Godzilla’s head on top of a real building in Tokyo that you can visit right now. Don’t believe us? Here it is from another angle that looks even more hilariously fake. 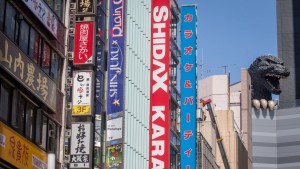 To clarify, this wasn’t something they put on top of the building to promote a new Godzilla movie or anything lame like that, it’s a permanent feature that the Toho building installed because it’s awesome and because the could. What makes this better is that the giant Godzilla head is situated directly next to a hotel, meaning every day, someone in Japan probably has sex while Godzilla watches through the window and nods approvingly. Truly they are light years ahead of us.

In recognition of his contribution to Japanese culture and tourism, Shinjuku ward officials in Tokyo also made Godzilla the official tourism ambassador of their city in 2015, despite the fact that A: He isn’t real and B: He’s destroyed it 3 times in his movies. Apparently officials were willing to let the minor transgression of destroying their entire city 3 times slide, because they also granted the King of Monsters residency to the city, citing, get this, watching over Japan. Which we’re assuming is code for “making sure nothing except him destroys massive chunks of it”. Oh and for anyone who’s read this far and still thinks we’re making shit up, Godzilla’s position as tourism ambassador has been recognised by no less of an authority than Wikipedia.

Sadly, Godzilla was busy on the day he was awarded this prestigious position and instead, a man in a rubber suit went and collected it and his cool sash, on his behalf, leading to arguably the singular most Japanese photo ever taken.