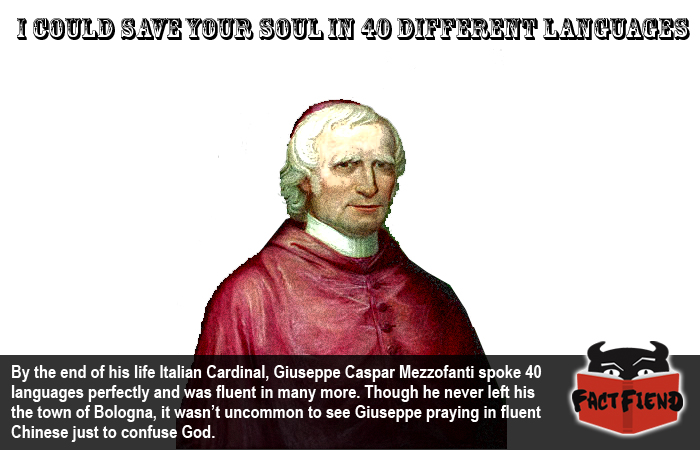 When it comes to speaking languages we’re guessing that like us, everyone here would be wicked impressed to meet someone who was capable of speaking even a handful of languages perfectly. Well we hope then your head doesn’t explode when you read about Giuseppe Caspar Mezzofanti, the man who could speak potentially hundreds!

Leaving us with the incredibly awkward task of saying that Giuseppe either spoke several dozen languages or over a hundred, which you’ll notice is a huge difference. However, even discounting the Italian dialects Giuseppe was versed in, his mastery of language was frankly mind-blowing.

People travelled from as far as China to see this mysterious cardinal capable of conversing with every human on Earth and literally every person who ever approached Giuseppe, regardless of which language they spoke were all utterly blown away with the fact he was able to converse with them in their native tongue. We should point out that Giuseppe almost never travelled, thus learned these languages, including his almost flawless pronunciation of them, from nothing but books. See kids, reading is rad!

Even more impressive, there is a story that states Giuseppe learned a new language in a single night when a stranger who spoke in a tongue he wasn’t familiar with came to him wishing to confess their final sins before they died. With nothing more to go on than their accent, Giuseppe was able to learn this stranger’s language well enough to absolve him of his sins before he passed away.

Though he only used his remarkable gift to spread the word of God with the many travellers who visited him to hear his gift first hand, some people believed that his gift was the result of a deal with the Devil, who according to the least metal of legends is capable of conversing with people in any language to tempt them away from God. Which you’ll notice is really stupid since it suggest one of either two things.

2. He does have it and simply wouldn’t share it with anyone, making him a selfish asshole.

Luckily, Giuseppe managed to avoid being burnt at the stake and lived a long, fulfilling life of quietly telling everyone he met to kiss his ass in Chinese. [Citation needed]