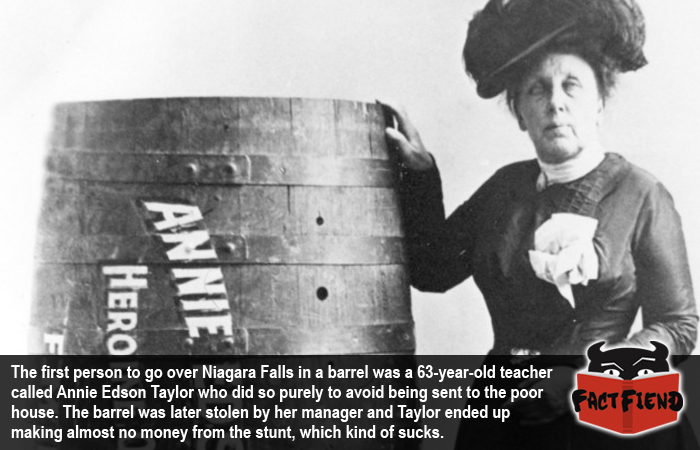 Niagara Falls is a 50 metre high, sheer drop into a pit filled with jagged rocks, into which tons of water cascade every second. Now you’d think that trying to ride the falls would result in a very quick and very awesome death, but unbelievably there have been several people from history who’ve totally survived doing exactly that, and the first person to do so did it for perhaps the greatest reason ever. Cash money.

Annie Edson Taylor may not seem like the kind of person you’d expect to be willing to throw herself over Niagara Falls in a giant wooden barrel, mainly because at the time, she was a 63-year-old teacher who looked frailer than frozen egg shells. Seriously, how many people in their 60’s, let alone ones alive in 1900, do you know who’d be physically capable of, let alone willing, to climb into a barrel and have you push it off of a waterfall? The answer is almost certainly, none, because nobody’s grandmother is that metal.

Annie Edson Taylor on the other hand, was that metal, however, her decision wasn’t influenced by a desire to be the most badass old lady in history, but by her desire to not end up dying penniless in the gutter. Taylor was inspired to go over the falls when she read about several daredevils attempting similar stunts who managed to draw massive crowds after her latest failed attempt to make some money in her advanced age. Taylor realised that if she did something absolutely balls-out crazy like climbing into a barrel and letting it float off the edge, she could make as much money as all of the daredevils she’d read about.

Here’s the thing though, dicking around at the falls was and still is incredibly illegal because neither the Canadian or American government wants to deal with that shit. To top it off, some of the daredevils Taylor had been inspired by had actually died just attempting to cross the river inside of barrels, so when she suggested being sealed inside of a barrel and having it pushed over the edge, officials were understandably hesitant to grant permission.

Taylor didn’t let that stop her though and after getting herself a manager, she ordered herself a giant barrel with an anvil and a mattress inside of it, for balance and comfort respectively. However, no one would help her with the stunt, you know because of all the people who’d died attempting almost the exact same thing, so to prove that the stunt was at survivable, Taylor shoved a cat into the barrel and kicked it off of the waterfall. Before you get upset, the cat survived without a scratch. In fact, here’s a picture of it to prove it.

After proving that a small animal could survive the trip, Taylor was satisfied that her 63-year-old frame could survive it too and on the 24th of October 1901, Taylor tucked herself into the Queen of the Mist (the big-ass barrel pictured above) and floated off of the edge of Niagara Falls and right into total fucking obscurity.

We say this because although Taylor was instantly recognised as a boss after surviving her trip off of the falls completely unharmed, she didn’t get a shred of the fame and more importantly money she wanted because almost immediately after the stunt, her manager stole her barrel and pretended that a younger woman had done the stunt instead, seemingly unaware that the best part of the story was that it involved a woman in her fucking 60’s!

As a result, Taylor spent the rest of her days desperately trying to make money from the stunt which put her in history books. She failed and died penniless at age 83, the exact fate she’d hoped to avoid by climbing into the barrel in the first place.