Elton John has enjoyed an illustrious half century long career filled with sold out, stadium shows and platinum selling albums. However, an oft overlooked aspect of John’s career is his long-standing “feud” with fellow musician, Rod Stewart, with whom he’s spent almost as long as he’s spent making music shitting on from a great height in interviews.

The first thing we need to clarify though before we get to the pranks John and Stewart have played on one another over the years is that the pair do respect and admire each other. With John once noting that they’re “cut from the same cloth” and are in fact, very good friends in real life, it’s just that they really enjoy fucking with each other. Especially when it comes to each others success, or lack thereof in the charts when they release a new album.

For example, both Stewart and John have recounted on numerous occasions that they frequently send catty, bitchy emails to each other whenever either of them has a new album. Which admittedly sounds a bit dickish so we feel compelled to note that the men sign off each email with their pet names for one another, Sharon and Phyllis. For the curious, Rod is Phyllis and Elton is Sharon.

Along with album sales, the men are also known to be competitive about their net worth to the point Stewart once left the UK for a tax haven in the 1970’s to save money. Something John responded to by calling Stewart a traitor, calling him on the phone and then blasting Pomp and Circumstance over the speaker at maximum volume. A burn that must have been especially painful coming from a man known for performing on stage in costumes like this. 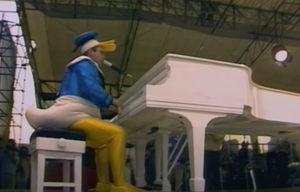 Speaking of money, the pair frequently like to flaunt their wealth via the exchange of wildly extravagant gifts, like a miniature fridge that ejected bottles in a cloud of multi-coloured smoke like a tiny gay Darth Vader. A gift Stewart bought for John as a nod to his famously flamboyant personality. Not to be outdone John sent Stewart a painting. By Rembrandt.

However the singers really come into their own in regards to one-upping each other when it comes to advertising their tours and shows. For instance when the two were performing in Vegas, literally across the road from another, one year, Stewart advertised his show by erecting a massive billboard stating “blondes have more fun”. An annoyed John responded by having an even bigger billboard put up saying “But brunettes make more money“.

On another occasion, Stewart advertised a show of his by flying a massive balloon with his own face on it above the venue. A balloon that reportedly cost Stewart a small fortune. Which we know because Elton John had a sniper shoot it down, prompting an irate Stewart to call him, calling him a bastard. Stewart did eventually get his revenge though, having a billboard advertising one of John’s shows cut down less than 30 minutes after it went up.

Other pranks played by the men include Stewart sending John a full-sized industrial hair dryer after he revealed in the press that he’d started to go bald and John sending Stewart a £10 gift voucher as a wedding gift. Partly as a nod to Stewart’s famously poor taste but mostly because it funny. Which admittedly, it was.