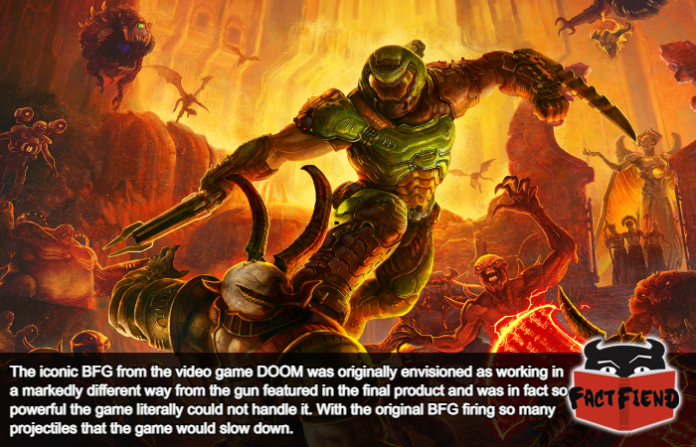 Within the context of the DOOM universe the BFG is the absolute pinnacle of weapons technology. Considered the single greatest asset in humanity’s arsenal in the fight against the endless hoards of hell, the weapon is almost as iconic as the series it hails from. A fact often attributed to the weapon’s awe-inspiring power and ability to utterly decimate and entire legion of demons in a single shot. Something it did so well in the original version of the game that they had to tone it down.

For people unfamiliar with the BFG which in canon stands for, we shit you not gentle reader, BIG FUCKING GUN, it is regarded as the singular most powerful weapon handheld humanity ever created. So powerful in fact that it had no realistic use in warfare due the massive cost of producing and firing it and the fact it works by boiling a persons internal organs inside their body until they explode. Which yeah, is probably against the space Geneva convention by like, a lot. 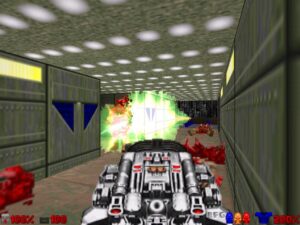 Anyway, the weapon is capable of utterly annihilating an entire hoard of demons in a single devastating shot in every game it appears in and has gone on to be one of the most recognisable aspects of the series due to its sheer power. An aspect of the weapon that is the result of a clever bit of programming in the first few games.

To explain, in the first few DOOM games the BFG doesn’t fire a single blast of energy as the game’s sprites suggest, but a massive ball of green sex energy and 40 invisible rays of demon annihilating goodness. The latter of which is where the weapon’s true destructive potential lies, with the rays alone being capable of inflicting enough damage to defeat basically any demon in the game.

The thing is, this version of the BFG, for all its power and capacity for destruction, pales in comparison to the original version of the weapon in early versions of DOOM.

You see, according to DOOM co-creator John Romero, the original idea for the BFG was for it to absolutely fuck up everything with a shotgun blast of searing hot red and green bolts of energy which would bounce around the room killing everything they came into contact with. Now while this sounds rad as fuck, Romero would later recall that they couldn’t figure out a way to implement the weapon without it bringing the game to a screeching halt.

More specifically, the game couldn’t handle the absolute balls-out insane amount of projectiles the weapon fired with each pull of the trigger and it would slow down as a result. Something that kind of went against the idea of DOOM being a frenetic twitch shooter where every moment is spent knee deep in the corpses of demons you just liberated from their own spinal column. Also, according to Romero, when the weapon was fired the red and green balls of energy made the game look like Christmas, which while fucking hilarious, sort of ruined the tone.

Because of this how the BFG worked had to be reworked and the damage it did toned down meaning the BFG was so powerful it almost broke the game itself.