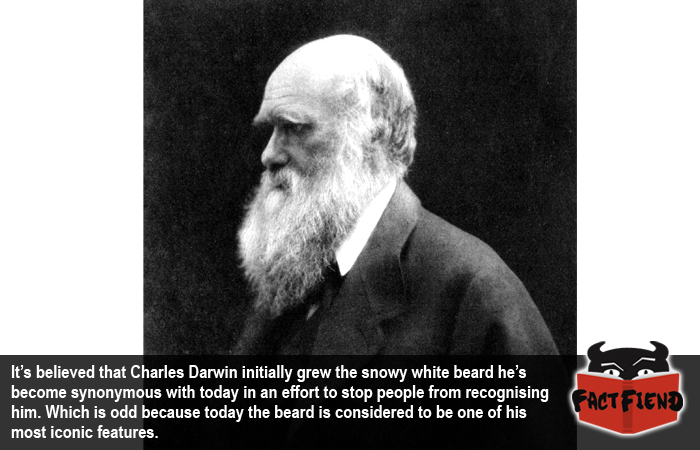 Whenever Charles Robert Darwin is mentioned in conversation it’s almost certain that your mind wanders to one of the B’s, the Beagle, the Book or the Beard.

Today we’re going to talk about the latter and how initially, Darwin grew that bad boy to stop people from recognising him in the street. Yes, as weird as it’s going to sound, Darwin originally grew that Gandalf-esque shock of facefuzz so that people wouldn’t be able to pick him out of a crowd.

Why? Well no one is quite sure, all we really know for definite is that Darwin began growing his epic neck-tickler in 1862 when he fell ill, which is around the time he began to withdraw himself from public life.

The first true test of the beard came four years later in 1866, when Darwin chose to attend a Royal Society meeting. The beard performed admirably and it was so effective at masking Darwin’s features, that one of his closest friends, Robert Hooker, didn’t recognise the geriatric naturalist when the two men were literally stood feet apart.

However, as anyone with a beard will tell you, they can be both a gift and a curse, Darwin’s beard was no exception. Though it helped him remain anonymous for a short while, the beard gods couldn’t allows such a glorious and fuzzy specimen of facial foliage to go so criminally unnoticed, and it wasn’t long before this new, bearded Darwin was thrust back into the public spotlight.

When the cartoonists got involved, it was inevitable that this was going to be the way Darwin was remembered by history. In the end, the beard Darwin grew to stop people recognising him, actually became his most iconic feature.