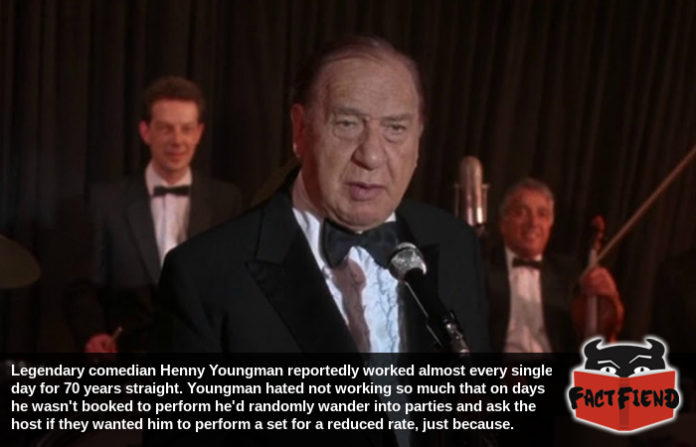 A wise man or possibly an evil ghost once said that all work and no play makes *blank* a dull boy. Well apparently Henry “Henny” Youngman decided to ignore the absolute shit out of that seemingly sound advice and worked pretty much until the day he died at age 91.

A one-liner comedian by trade, Henny’s whole shtick is that he’d tell jokes while holding onto a violin that he’d never actually play. Henny became so well known for doing this that a rumor began circulating that he didn’t actually know how to play the instrument, which well, wasn’t true. You see Henny was actually an exceptionally skilled violinist, it’s just that he preferred to always leave an audience wanting more and would only play his violin at big shows, usually as the finale to his act.

As a testament to Henny’s skill he was able to flawlessly play the instrument and tell jokes at the same time without losing either his place in the song or the audience.

Famous for his rapid-fire, machine-gun like delivery and ability to just know exactly when to tell his next joke to ensure the audience never stopped laughing, Youngman usually limited his sets to just a few minutes in length. This isn’t to say that Henny couldn’t carry a show for longer if needed because he seemingly possessed an eidetic memory when it came to jokes. Which was probably a good thing given that Youngman quite literally wrote enough of them to fill an entire fucking book. 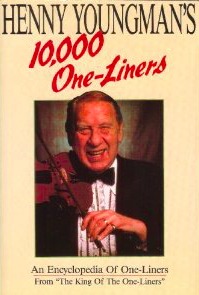 Youngman’s near-limitless repertoire of jokes coupled with his penchant for only doing 10 minutes sets enabled the comedian to perform multiple times per day, sometimes for the same freaking crowd, and still have plenty of new material. As an idea of just how much material Henny had it’s noted that at the peak of his career he was playing upwards of 200 shows per year, which makes him sound less like a comedian and more like the world’s most committed James Brown tribute act.

But here’s the thing, Henny likely played ever more shows than that per year. How? Well to put it simply, Henny didn’t give a fuck and would play any show, for any amount of money if he had the time. As an idea of how little free time Henny actually needed to be convinced to perform, stories tell of the comedian putting impromptu gigs on his way to the fucking bathroom during lunch dates with his wife upon being stopped by fans who recognised him.

Not content with simply performing whenever he was asked, Henny eventually took to artificially engineering situations where he’d be asked to perform, just because. For example on his days off Henny would travel to hotels and crash weddings and Bar Mitzvahs because he knew that he’d inevitably be asked to perform by someone who recognised him. Upon being recognised Henny would then explain that he’d love to tell some jokes to mark the special occasion. For $100.

When this didn’t work Henny would sometimes just walk straight up to whoever looked the most important and say “I’m Henny Youngman. I’ll do 10 minutes for $100.” Henny’s bravado usually paid off and most of the people he approached were generally quite happy to pay a hundred dollars or so to have hi class up whatever shindig they were hosting. Because seriously, how baller would it look to have a legendary, world-famous comedian approach you about entertaining guests at your party?

It’s noted that Henny’s penchant for playing random gigs, even on his fucking day off, culminated in him technically never having a single day off in his entire 70 year long career. In fact, the only thing close to a vacation Henny ever took was a week he took off following the death of his wife and a month he spent in hospital when he was 91 after developing pneumonia. As you may recall from the introduction of this piece, that’s the age Henny died meaning yes, he only stopped performing because of an illness so severe it literally fucking killed him.