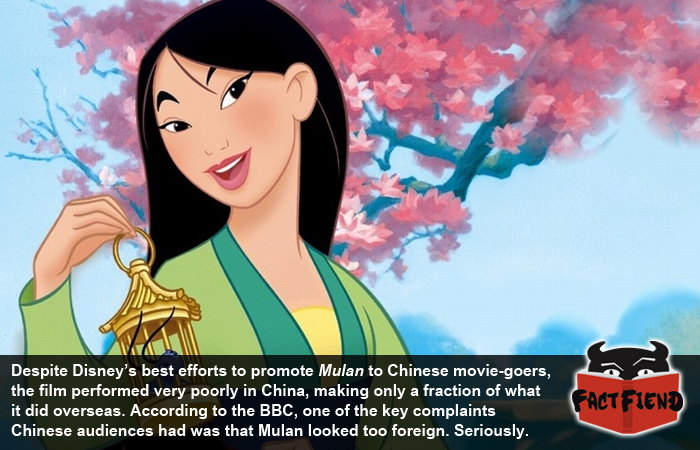 Mulan is a 1998 Disney film loosely based on the story of a near mythical figure from Chinese history known as Hua Mulan. The character is notably one of the few non-white Disney Princesses, which makes it kind of awkward that even though the animators drew Mulan as being Chinese, actual Chinese people thought she looked white.

As you may or may not know Disney officially recognises 11 characters as being part of the legendary pantheon of Disney Princesses, a collection of fictional females with more power than many real women in positions of authority. Of these 11 characters, all but 4 are whiter than a snow angel’s taint and it’s worth noting that technically, Mulan isn’t even a real fucking princess meaning there are only really 3 non-white Disney princesses.

Seeing as Mulan was the first major Disney character of Chinese descent, Disney were rather keen to have the film shown in China, hoping that it would prove as popular as, if not more so than their last big Chinese hit, The Lion King. The songs of which all sound amazing in Chinese.

You see, China is a huge market for films and more recently it has proven to be one of the most lucrative markets for summer blockbusters, back in 1998 though, the Chinese government only allowed 10 western films to be shown in the country per year. This wouldn’t have been a problem for Disney who could have easily gotten any film they’d wanted shown in the country just by flexing their corporate muscle if they hadnt’ funded a documentary about the Dalai Llama, you know, that guy China fucking hates.

Amazingly, the Chinese government looked past this indiscretion and kindly allowed Disney to show the film in Chinese cinemas, a year later, after bootleggers had already pirated the shit out of it, hilariously.

To make matters worse, Disney were given the choice to screen the film after Chinese New Year (traditionally the most profitable season for films in China) in barely a handful of cinemas or not screen it at all. Disney, unwilling to piss off the country that made all their crappy Mickey Mouse ears, agreed and the film made an embarrassingly small amount of money.

As if that wasn’t bad enough, Chinese citizens who actually bothered to watch the movie instead of watching the awesome pirated version that probably had scenes from Alien 3 spliced into it or some shit, criticised almost every aspect of it, in particular the character Mulan. Despite Disney’s best efforts to make Mulan look vaguely Asian and avoided their natural urge to give her a massively racist accent, Chinese audiences still felt that she looked more western than Chinese. Another key complaint was that the story bore little resemblance to the actual story of Hua Mulan, which amongst other things, didn’t contain an anthropomorphic, wise-crackin’ dragon. Making it the only Chinese myth we’ve ever heard of that doesn’t feature a dragon in some way.

The end result was that Disney alienated Chinese audiences for another few years until Transformers 4 showed them that the real way to pander to China is to fill it with hot, non-fictional Chinese women instead of animated ones.