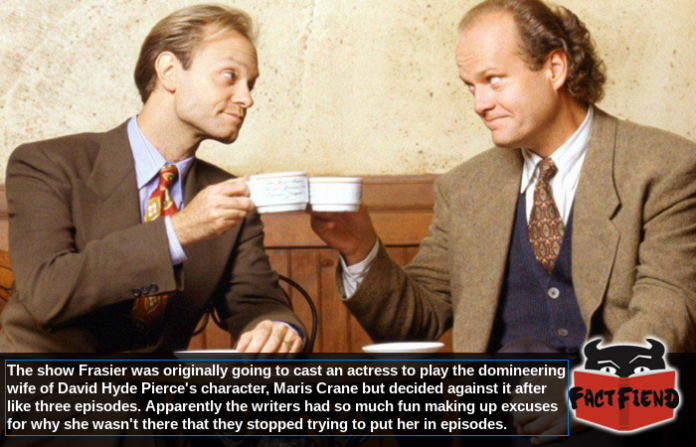 An unseen character is, as you’ve probably guessed from the name, a characte from a film or TV show that, for whatever reason, never appears on screen. While usually played for laughs on most TV shows there’s at least one show where an unseen character remained, well, unseen, is because they literally couldn’t find an actress capable of playing them. Frasier.

For fans of Frasier reading this you probably already know that we’re talking about Maris Crane, the manipulative shrew-woman who spends the show’s first few seasons riding the dick of series mainstay Nile Crane. The snooty brother of the show’s titular character and a man with almost nuclear levels of swag.

You see, initially the character of Maris was absolutely supposed to appear on screen at some point in the series and as a result, the writer were sure not to describe her appearance in too much detail so that an actress could be cast to play her eventually. However this changed when they stumbled ass-backwards into something that ended up becoming one of the show’s most beloved running gags, Niles’ increasingly bizarre excuses for why she couldn’t attend events. For example, in one episode Niles explains that Maris can’t be there because she spoke to a rude telephone operator which “shattered her calm” and in another that she was too tired to attend a party because she was exhausted “by the pressure to be interesting” which, well, is a big fucking mood.

In fact, the writers so enjoyed writing these excuses that they kept pushing having her appear on the show so that they could keep writing more. Now this alone wouldn’t have stopped Maris appearing in an episode at a later date if not for the fact that the writers also began exploring another element of Maris’ characterisation as the series went on, her narcissistic obsession with her appearance and in particular, her weight.

Why would this stop her from ever appearing in the show you ask? Well it wasn’t long until the writers started putting wildly outlandish claims about Maris’ appearance into scripts, with the majority of jokes centring around either how unusually thin or pale she was. For example in one episode Niles notes that Maris is able to “hide behind a breadstick” and in another, when asked to describe her appearance Nile’s father simply describes her as “very Caucasian”. 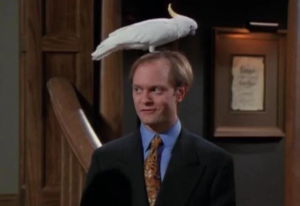 Other jokes cracked about Maris during the Frasier’s TV run that are ostensibly supposed to be describing a character who exists in the universe of the show include one about her spraining her wrist trying to put dip onto a cracker, another about her being mistaken for a coat rack and even one where it’s claimed that she’s so light she doesn’t leave footprints in snow like she’s Legolas or some shit.

As you can imagine, after a while it became impossible to cast an actress who could live up to the image of Maris conjured by these jokes so the decision was made to leave her as an unseen character. According to David Hyde Pierce, who portrayed Niles Crane in the show, the descriptions of Maris got so extreme as the series went on to say that she was pretty much impossible to cast, reportedly stating that any portrayal of her true to the descriptions in the show would end up looking “reptilian”. 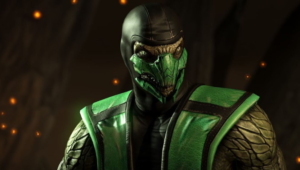 Which if you ask us, makes the show way better because the idea of a Niles Crane being such a doting husband that he unconditionally loves a woman who by accounts, looks like fucking Reptile from Mortal Kombat.