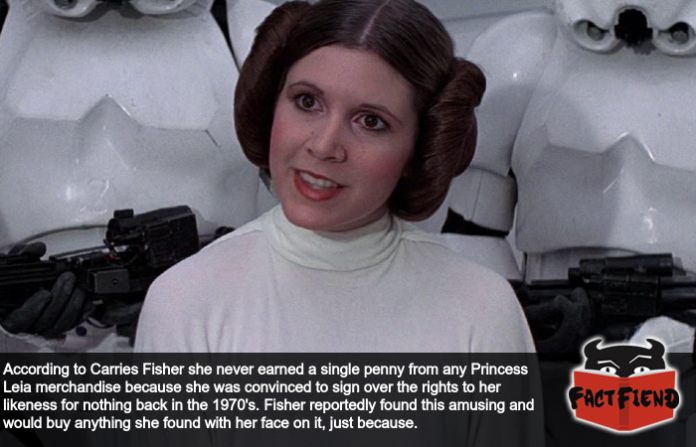 To many people the late, great Carries Fisher was Princess Leia, a character who ranks as one of the most recognisable princesses in fiction who occasionally wields a laser gun. Endlessly featured in merchandise and marketing materials you’d assume the fact Carrie Fisher’s face was the basis of the character would result in her have earned a fortune in likeness rights alone. Or at least she would have if she hadn’t been convinced to sign away those rights for precisely zero dollars in the 1970’s.

Exactly how much money Carries Fisher potentially pissed away by not securing these rights back then is unclear but given the sheer amount of stuff Lucasfilm and later Disney have slapped Princess Leia’s face on it’s probably safe to say it would have been enough to buy god’s car second hand.

Now while the exact details of the deal Fisher struck back then aren’t clear, from what we’ve been able to glean from interviews she’s given about it, it would seem they heavily favoured George Lucas who basically got the rights to her likeness forever. Something Fisher reportedly teased the director about endlessly only for him to basically shrug and tell her to fuck off every single time.

If anyone is currently feeling annoyed upon learning that, it’s probably worth mentioning that George Lucas was also fucked over in regards to merchandising rights. Infamously signing away the exclusive “intergalactic” rights to the entire Star Wars universe for $10,000 per year to Kenner. With Lucas reportedly having to split a nickel with Fox for every dollar of merch Kenner sold using his property like a total chump.

As an idea of how short-sighted everyone was back then in regards to the value of the Star Wars brand, Kenner forgot to pay Lucas that fee in the early 90’s at which point, out of nowhere, Lucas announced the Prequel Trilogy. Meaning yes, the entire Prequel Trilogy’s exists because Lucas was salty he hadn’t earned enough millions from OT merch and wanted to merchandise the everloving shit out of something he got a bigger cut on.

Anyway, in regards to Fisher, she was surprisingly chill about having someone else make millions of dollars using her face, once quipping that she would frequently buy bad Leia merch whenever she saw it, just because.

Fisher was also characteristically quick witted whenever the deal was brought up in a negative sense, rightfully pointing out that nobody back then thought movie tie-in merchandise was something that would make money. Let alone make money for 40 years straight. She would also, never passing up an opportunity to dunk on Harrison Ford, point out that she was only 19 years old when she signed that deal and at least had the excuse of being a naive teenager. Ford was in his 30’s and fell for it too. then again, given what we know about both actors we can’t imagine either of them could muster the energy to give the remotest whiff of a fuck.