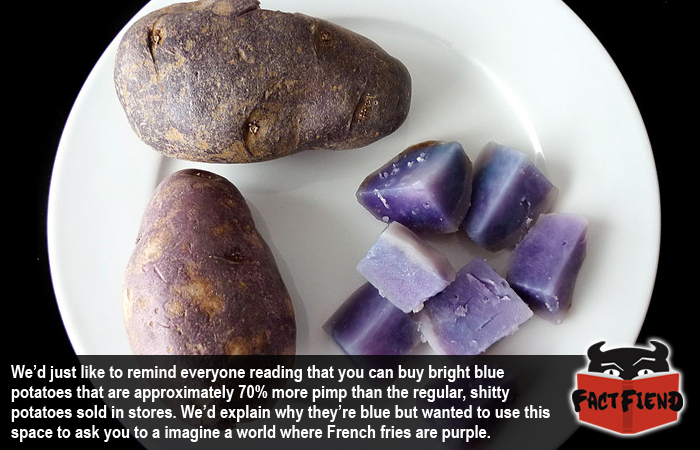 No your eyes haven’t suddenly decided to punch the logic part of your brain in the nuts, those potatoes really are blue and far from being an experiment gone wrong or the result of running over a Smurf while harvesting, they’re a real breed of potatoes you can actually buy.

Known, oddly enough, as “blue potatoes” several breeds of ground apple come in the brilliant shade of violent you can see above and unbelievably, or believably depending on how often you eat Skittles, they’re completely edible and are in fact, better for you in some respects than regular potatoes. For example a single blue potato contains your entire daily recommend allowance of coolness in a single serving, something regular potatoes can only match if you eat them while wearing sunglasses, indoors, at night.

If you’re wondering why these orbs of deliciousness are bright blue, their coloration is due to anthocyanin, an anti-oxidant and apparently really blue chemical present in the potatoes flesh. Oddly, when an Irish potato farmer introduced an ancient breed of bitchin’ blue potatoes to his customers, he intitally received quite a bit of backlash from customers who didn’t want to eat blue food. Proof that people will always find a reason to not eat vegetables regardless of how awesome they are.

Over here in the states the blue potato is also making headway and researchers have actually managed to create a hybrid potato that is even more fabulously colored than the regular variety, sporting violet skin along with blue flesh. Dubbed, “The Adirondack Blue potato” this blue affront to God was released along side a sister potato with an equally as vivid red color aptly named the Adirondack Red potato by Cornell university in 2004. We don’t want to tell you how to live your lives, but right now everyone reading this could be eating literal red, white and blue America fries made from these potatoes. America fries you guys!