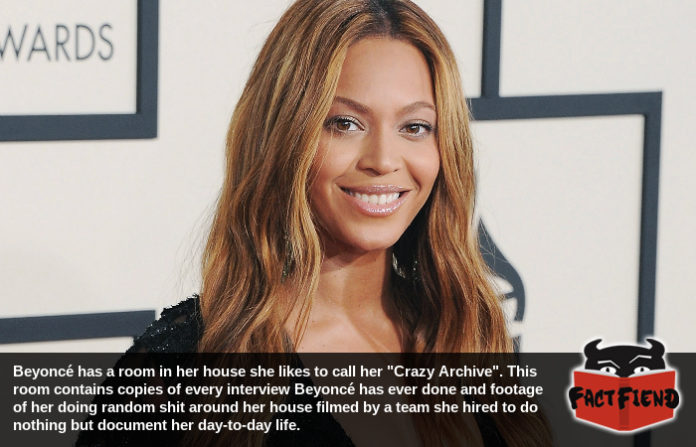 Beyoncé is a celebrity who has spent decades carefully cultivating her image and is so protective of it that she’s been known to send threatening letters to sites hosting unflattering pictures of her usually stunning mug. Which makes it weird that she has a vast archive in her home containing thousands of hours of footage of her lounging around the house without makeup.

Before moving on, for the few people reading this who aren’t familiar with the story, in 2013 Beyoncé, or more specifically her publicist, sent Buzzfeed a vaguely threatening email after they published this image of her Super Bowl halftime performance.

While the publicist admitted that they had no legal right to make Buzzfeed remove the photo, they “respectfully” asked the site to consider replacing it with a better one. Because nothing says respect like attempting to strong-arm a person into sacrificing their creative freedom to satisfy the ego of a multi-millionaire. Buzzfeed politely told Beyoncé’s publicist to fuck off and the image can still be found on their site, along with virtually everywhere else online because nothing helps something spread further on the internet than telling people not to share it with their friends.

Which brings us to Beyoncé’s crazy archive. In an profile written by GQ that year, Beyoncé casually revealed to the interviewer behind the piece that she had a guy who followed her around 16 hours per day filming her every move. The singer then explained that this footage was purely for her own benefit and was in the process of being archived so that she could refer back to it at a moment’s notice.

But here’s the weird part, according to that piece, a lot of the footage was just of Beyoncé doing random shit around her house like eating dinner with her husband or watching TV. What possible value could that footage have to someone known to have a hard-on for attempting to have unflattering images of herself scrubbed from the internet to maintain a fragile illusion that she’s flawless at all times?

That’s not a rhetorical question by the way, we legitimately want to know. Mainly because it appears that Beyoncé herself doesn’t really have a reason for wanting this footage to exist, hence why she refers to it as her “crazy archive”. The singer notes that while she does sometimes use the footage obtained to critique performances and rehearsals, the only other use she seems able to imagine for it is referring back to old interviews. You know, the same interviews that are published online for anyone to read she could easily request a copy of.

The vast library of footage supposedly consists of over 50,000 hours of video that is meticulously catalogued and archived by a real human being who gets to write “Beyoncé archivist” on their résumé unironically. Although the singer admitted that some of the footage would likely be used in a 2013 documentary about her career called Life Is But a Dream, it begs the question, what about the 49,998 of footage the don’t use for the documentary? Also, remember that all this happened 4 years ago, so imagine how much footage has been recorded since.

Again, we weren’t asking a rhetorical question there, we really want to know what anyone, including Beyoncé, could do with 6 straight months of footage of her eating watching TV.