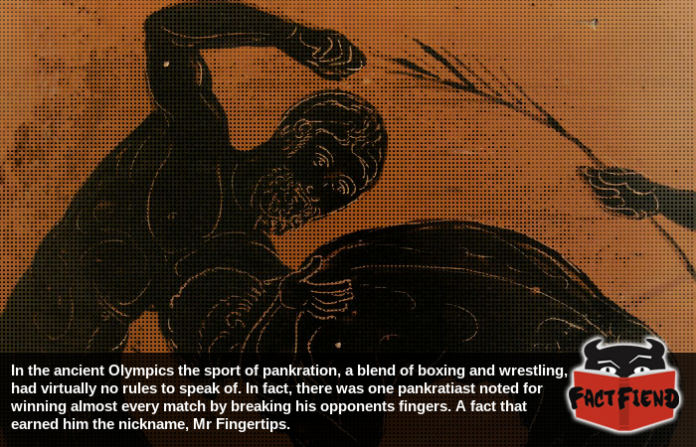 Back in the days of the ancient Olympics one of the few ways for an athlete to ensure their name would be remembered by all of history, forever, was to win. With stakes this high, it’s somewhat understandable then that a number of athletes resorted to, shall we say, less than orthodox tactics to secure victory. Like the fighters who did nothing but break peoples fingers.

Now while up and snapping someone’s fingers off sounds like cheating, it was actually perfectly within the rules to do this and worse to an opponent for much of the history of combat sports at the ancient Olympic games. This isn’t to say there were no rules, with boxing having the most, wrestling having a few less and pankration (a blend of both of those sports) having only two real rules, no eye gouging or biting.

In specific regards to pankration, save for those two rules everything else was allowed, up to and including shots to groin. Which were not only legal, but heavily encouraged in bouts due to their effectiveness. As an idea of how pervasive ball-shots were in pankration bouts, some fighters went as far to develop holds that specifically prevented an opponent from grabbing and crushing their nutsack. 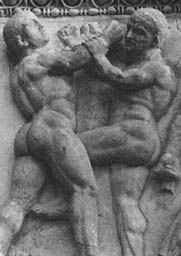 As for wrestling, while punches and kicks were disallowed in bouts, virtually every kind of hold was, including ones specifically designed to break an opponents limbs. An apparent exception to this was holds designed to break an opponents fingers, which was briefly banned for a few years at the Olympics before being legalised again because wrestlers kept doing it anyway.

The most prominent example of which is arguably, Leontiskos of Messene, who won two Olympic wrestling wreaths in a row by rushing his opponent and violently bending their fingers back until they broke. The pain of which understandably made many of his opponents quit outright and in the event they didn’t, allowed him to manhandle them with impunity and win that way.

Amusingly, it’s noted that some Olympic athletes became so well known for these underhanded but otherwise legal tactics that it was all history saw to remember about them. For example, in the pankration event there was a fighter whose favoured technique to defeat an opponent was to grab their ankle and push them over, rending it from its socket. Despite winning several Olympic bouts doing this and only this, the people of ancient Greece didn’t bother recording this fighter’s name, but the nickname bestowed upon him by fans. Jumping Weight as a nod to the fact he would leap into the air while performing his signature move.

However, our favourite is another unknown pankration practitioner who favoured the same tactic as Leontiskos. Breaking the fingers of his opponent the moment a bout began. Like with Jumping Weight, fans of this fighter some came to know him by a nickname, Mr Fingertips. Which is frankly, amazing.