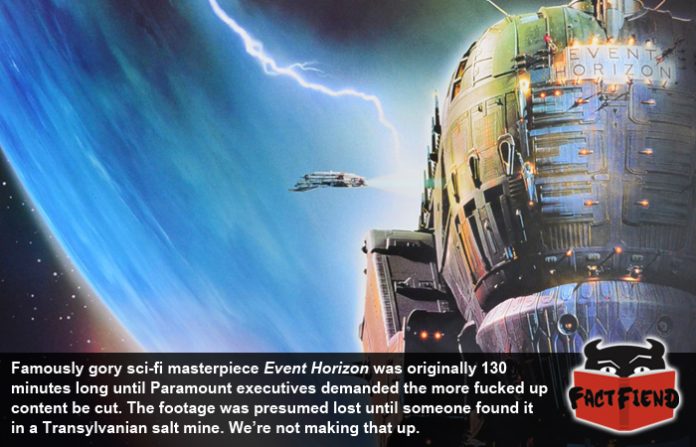 Event Horizon is considered one of the best, albeit, messed up, sci-fi/horror movies of the 90’s. What few people realise though is that the original cut of the film was way worse. Fortunately, we’re never allowed to see it. Warning, this article contains spoilers, sex, gore and sexy spoilers.

If you’ve never seen Event Horizon, it’s basically about a ship that accidentally discovers a portal to hell that causes everyone who comes into contact with it to experience vivid, nightmarish visions that cause them to commit suicide. Apparently suicide isn’t considered a sin that has you instantly sent to Hell anyway if its in space. The film stars Laurence Fishburne and Sam Neill so it’s highly recommended you don’t see it unless you’re 100% comfortable with seeing the guy from Jurassic Park have his fucking eyes gouged out.

The film received generally poor reviews from critics upon release but has since become something of a cult classic, because come on, it stars the guy from Jurassic Park and Morpheus being murdered by space demons. In interviews since the release of the film director Paul Anderson has maintained that the film would have been much better received if the studio had, had the balls to release his original cut, which according to everyone who saw it, was way gnarlier than the final product. Then again, Anderson is also the guy who directed the Resident Evil movies so fuck him.

According to Anderson when test audiences saw his first cut, the extreme amounts of gore caused people to faint and Paramount executives who’d apparently not bothered to watch the movie in its entirety before that point were similarly appalled at what they saw. The infuriated executive demanded that Anderson remove the offending content, but only gave him a matter of weeks to edit together another cut of the film. With so little time, Anderson hastily cut out 30 minutes of the most bitchin’ and questionable content.

While many of the cut stills you can see in the above link were indeed in the final version of the film, it was edited in such a way that they only appeared on screen for a fraction of a second each. In the original cut more screentime was given to the most disturbing of the images to make the audience feel exceptionally uncomfortable. The thing is, most of that footage no longer exists because Paramount immediately destroyed it as soon as they got their hands on it, presumably in the hopes that they’d destroy the demonic power it clearly contained or because they’re a bunch of dicks.

The only known extended cuts of the film around today source their additional footage from early, pre-released VHS copies and even they don’t contain everything. People wanting to see Anderson’s original vision for the film were happy when the news broke that, for some insane reason, celluloid containing the cut scenes was found in a Transylvanian salt mine however due to either the poor conditions of the mine or possible sabotage by Dracula, the footage was damaged to the point it couldn’t be used. Meaning the directors cut of this film will literally never be released. Which is a strange thing to say for a film released in 1997, but hey, that’s apparently the world we live in now.