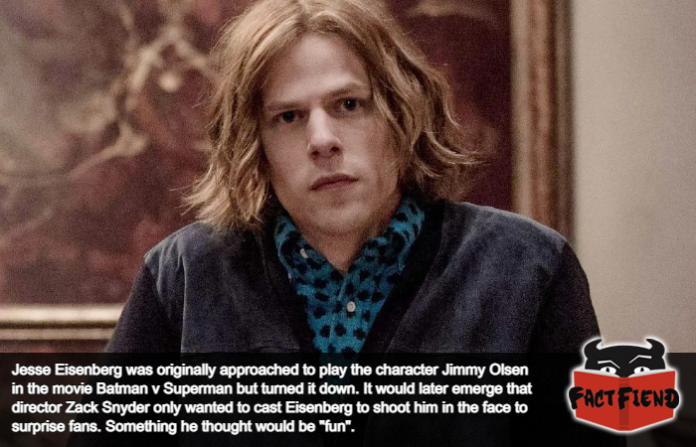 We think it’s fair to say that Zack Snyder’s take on the DC universe has received a, mixed reception. With much of the criticism directed towards the director focussing on his seeming lack of unfamiliarity with the characters he’s making movies about and the fact his filmmaking style is about as subtle as a cast iron sledgehammer to the balls. Something no better epitomised than by the fact Snyder has gone on record as saying he wanted to shoot Superman’s best friend in the face, for fun.

To explain, in the neatly coiled cinematic turd known as Batman v Superman: Dawn of Justice there’s a brief, blink and you’d miss it cameo from fan favourite Superman character, Jimmy Olsen. Superman’s best friend and confidant as well as a frequent source of comic relief and humanity from the original comics. For example, here is cutting Superman’s hair while Superman reads a comic with the same image on the front to let him know how it’s going to turn out.

Now the reason Olsen’s cameo in Batman v Superman is so short and one that many fans of the character didn’t even notice is because he’s not named in the only scene in which he appears and because he almost immediately gets his head blown off by a terrorist moments after it starts. Like, seriously, this guy gets so little screen time that you can see the gun that kills him on the image used for his DC Extended Universe wiki entry. 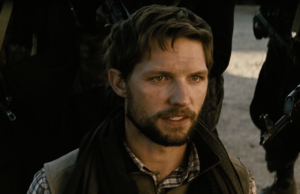 In fact, the only way we know that this random chucklefuck is Jimmy Olsen is because that’s how the actor who plays him, Michael Cassidy, is credited the movie’s end credits.

Anyway, according to Zack Snyder the original intention was for this cameo to be a little more, involved and feature Jesse Eisenberg as Olsen, no doubt utilising some of the nervous, frenetic energy he’s known for as an actor. However, Eisenberg ultimately turned down the part, in part, because Zack Snyder only talked about how the scene would be shot and not what the character’s motivations were or anything like that. Something we feel sums up basically his entire creative output.

Moving on, Snyder’s vision for the scene was for Eisenberg to come in and introduce himself to Amy Adams’ Lois Lane. The idea being that fans who know would do that annoying thing where they nudge you lightly and say something like “That’s Superman’s friend?“. Whereas the average viewer with no familiarity with Olsen would be equally as excited to see a big actor like Eisenberg in an unannounced role. 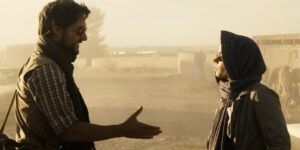 Snyder’s plan was then to have the character get shot in the face to shock both of those groups. You know, kind of like how the directors of Deep Blue Sea intentionally killed Samuel L. Jackson in a completely unexpected way because they knew killing off the biggest name in the movie would keep fans guessing about who the sharks would take out next. Only, for a much more stupid reason. Specifically, according to Snyder, he only wanted to kill off Olsen “because he could“ noting that he had no plans for the character and so instead decided to have him brutally murdered, for fun.

And we don’t think anything sums up how little Zack Snyder thought about these movies more than the fact a movie where Samuel L. Jackson gets attacked by a shark, indoors had more justification for that decision than he did for killing the second most important person in the main character’s life.