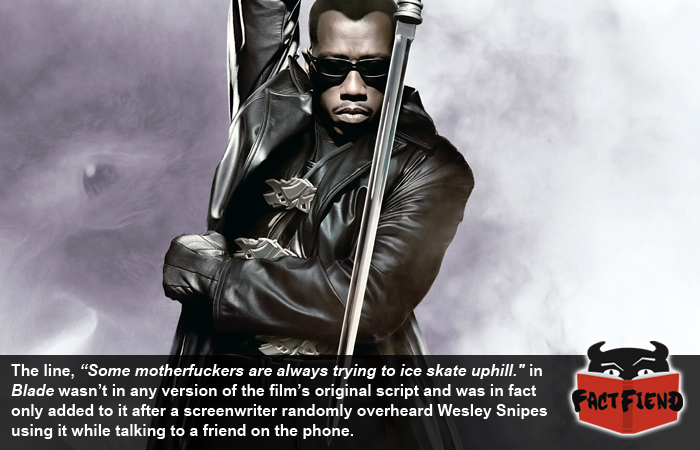 With rumor constantly circulating that Wesley Snipes is in talks with Marvel to reprise his role as Blade, the Marvel anti-hero who punches vampires to dust, we thought it’d be fun to talk about how Snipes is probably the most qualified person alive to play Blade. If only because he basically stayed in character the entire time he was on set for all three movies.

For anyone who hasn’t seen Blade, Blade 2 or the cinematic turd that was, Blade 3: Trinity, they essentially revolve around the titular Blade’s quest to stab every single vampire on Earth so hard they explode with occasional help from Ryan Reynolds sporting the most punchable beard of his career.

Ignoring the fact that Ryan Reynoldy inexplicably got to appear in 2 more superhero movies after this before being cast as Deadpool, the films are somewhat entertaining. You know, if you want to hear Wesley Snipes growling one-liners in between body-checking vampires and taking them out with 18-hit twirling shotgun combos using his decades of experience as a martial artist.

One of the most memorable lines from the first film was “Some motherfucker’s are always trying to ice skate uphill“, said by Blade moments before backflip kicking a syringe full of anti-vampire juice into the main bad guy’s face. None of that is hyperbole and the scene plays out exactly as stupidly as you’re currently imagining, if not more so given that it stars a guy most associated with kicking Woody Harrelson’s ass at basketball pretending to be a ninja vampire.

But here’s the best part, according to the director’s commentary for the film, that line wasn’t in any version of the original script. It was just something a screenwriter overhead Wesley Snipes saying while casually talking to a friend on the phone, in full Blade costume. After overhearing the line, the screenwriters hastily added it to the script because shit, it was better than anything they’d written up to that point.

Not content with having the awesome shit he said to his friends in everyday conversations added to the actual script, during the production of all 3 Blade movies Snipes often insisted on staying in character all of the time. This came to a head during the production of Blade 3: Trinity when Snipes simply refused to come out of his trailer to shoot scenes because he’d smoked too many drugs. Now we’d argued that being high as balls isn’t conducive to playing a character best known for being a vampire slaying ninja who communicates solely through open hand slaps and drop kicks, but Snipes sure as hell sold the fuck out of being drugged in that scene where he’s interrogated by the police.

Snipes’ refusal to act – prompting them to film most of his scenes with stand-ins or simply without him in the frame so they could cut to a reaction shot they’d filmed earlier – annoyed the director so much he eventually confronted Snipes about it, saying that he should probably quit since they could finish the film without him. Snipes, impressed by the director’s directness (heh) took his criticism on board before slowly and carefully attempting to strangle him. Which, well, actually sounds like something Blade would totally do.

After the incident neither the director or Snipes would speak to other, prompting Snipes to resort to communicating via small notes he’d leave around set. Of course to let the director know the notes were from him, Snipes helpfully signed each one, “from Blade“, presumably in crayon because we don’t think Blade studied penmanship in vampire murder school.

For more stories about actors refusing to break character, why not read about Ray Park stayed in character as Snake Eyes throughout the production of the G.I. Joe movies and never spoke to anyone.