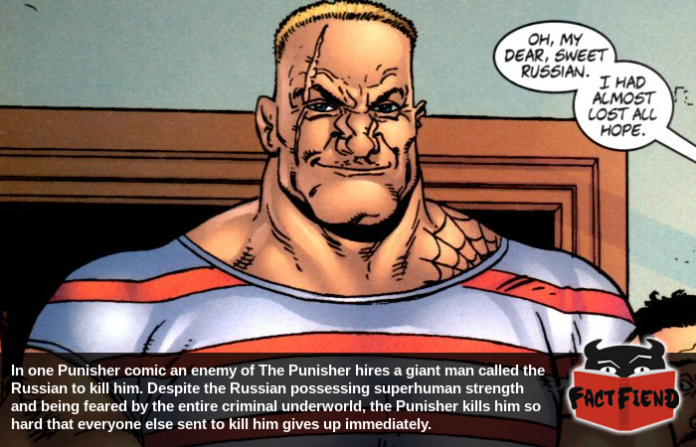 In the comics he hails from Frank Castle, or the Punisher to the people he’s pointing a gun at, is a man feared by the criminal underworld for the brutality with which he dispatches their friends and colleagues. A fact he once utilised to end a city-wide mob war, with a little help from an overweight neighbour’s ample carriage.

This story takes place during a limited run of Punisher comics from the year 2000 written by author, Garth Ennis simply titled, Welcome Back Frank. As the name suggests, the main intention of the series was to reintroduce the character of the Punisher to comic audiences of the time and show people unfamiliar with his backstory what he was all about. 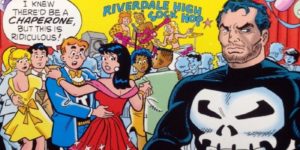 Now the main narrative thrust of the series details the Punisher’s one man war on organised crime, specifically the fictional Gnucci crime syndicate which is headed up by a maniacal, matriarchal mastermind of crime known as Ma Gnucci. A woman the Punisher taunts into madness by methodically dismantling her criminal organisation around her and ruthlessly slaughtering every person on her payroll. He also goes out of his way to be especially violent when murdered anyone related to her, you know, just to be a dick.

Not content with destroying her life in a metaphircal sense, the Punisher also sees to it that Ma Gnucci is horribly mutilated by luring her into a zoo and then punching a polar bear in the face to piss it off so that it will maul off her arms and legs. None of that is made up.

As you might expect, Ma Gnucci doesn’t take kindly to this and contacts a 7ft tall bulletproof mercenary called the Russian and offers him $10 million to kill the Punisher. As an aside, because this is kind of amazing, when the Russian finally turns up he is asked by those present how he was able to make it to New York without being seen or noticed since he’s wanted by near enough every law enforcement agency on Earth and isn’t exactly a guy who can blend into a crowd. Something the Russian finds amusing, noting that he simply stole a plane, crashed it into the woods near the Canadian border and then walked to New York.

The story continues and explains that the Russian is briefed on the Punisher’s whereabouts before being given a simple command, return with his head. Not being a man who likes to fuck around, the Russian makes a beeline for the Punisher’s apartment and tries to beat him to death with his ham-sized man hands. Despite the Punisher’s impressive unarmed combat skills and dearth of experience fighting overwhelming odds, the Russian quickly gains the upperhand thanks to his sheer physical bulk and judicious use of the ol’ porcelain throne. 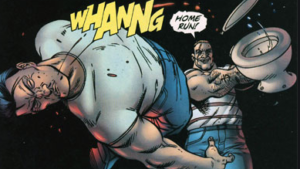 However, the Punisher isn’t the kind of man to go down without a fight and certainly not a comic character above using, shall we say, unconventional tactics. Something we say because the Punisher eventually bests the Russian by pushing him over and then smothering him with his morbidly obese neighbour, Mr. Bumpo. 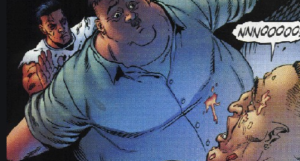 After ensuring that the Russian is dead by simply laying atop his neighbour until he stops moving, the Punisher then cuts off his head and drives to Ma Gnucci’s house. Which is where this story gets kind of ridiculous. You see, the Russian is noted as being fucking terrifying and easily one of the most fear assassins on Earth due to his massive size and seeming invincibility. Hell, one character even notes that the Russian inserts himself into wars and international conflicts for fun and is even rumoured to have eaten a man, for a bet.

So as you might imagine when the Punisher turns up with his head the few criminals loyal to Ma Gnucci tasked with guarding her unilaterally decide “fuck this” and leave her to die. The Punisher takes advantage of this stroke of good fortune by robbing Ma blind and then burning her house down with her inside it. Which, well, is very in character for him.