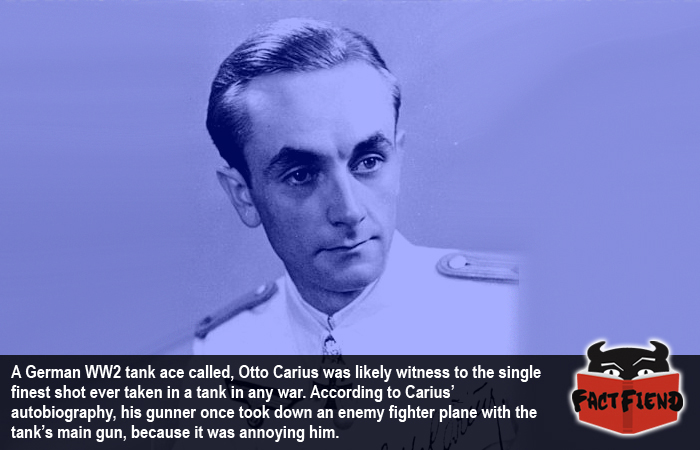 Here me talk about tigers that time a Swiss guy made me think an eagle was going to claw my balls in the video version of this article.

Alternatively, read the original article below.

To quote Halo 3 for a moment, “tank, beats, everything“. If you ever doubted this, allow us to tell you the story of the time someone in WW2 used one to shoot down a Russian plane.

During November of 1943, a German tank ace called Otto Carius was tasked with commanding a platoon of tiger tanks near the Belarusian city of Vitebsk. Otto’s mission was simple, shoot every Russian tank he could find, right in the face.

Unluckily for the Russians, tank-punching just so happened to be Otto’s speciality. Though we don’t have exact figures, it’s commonly accepted that Otto was personally responsible for anywhere upwards of 150 tank kills.

Now during WW2, there was almost nothing you could find on an average battlefield that would pose a significant threat to a tank. Their armor was simply too thick for most armaments to penetrate, even with a box of chocolate and lavender scented lube. This was especially true of the Tiger tanks Otto and his men were driving, all of which had exceptionally thick armor plating in comparison to other tanks from the same era.

However, this didn’t stop Russian fighter planes from continuously shooting at Otto’s platoon, much to annoyance of Otto’s gunner, Unteroffizeier Kramer. Though the bullets were doing little, if any damage to Otto’s tank, Kramer became increasingly frustrated at the constant pinging noise of bullets hitting the tank’s hull.

Eventually, either the noise or the lack of murder got to Kramer and he slowly began to turn the tank’s main gun into the flightpath of the attacking planes, intent on shooting them out of the sky. It’s at this point that we should probably point out that shooting a plane out of the sky with a tank’s main gun is a feat most would deem impossible. We should also probably point out that Kramer succeeded in shooting down an attacking fighter with his second shot.

Otto would later describe the shot as one of the single most impressive things he’d ever seen, commenting that it was likely an accomplishment “unparalleled on the Eastern Front” and this was coming from a guy who personally destroyed 150 tanks.

Man, tanks, really do beat everything. As long as you’re suitably annoyed.