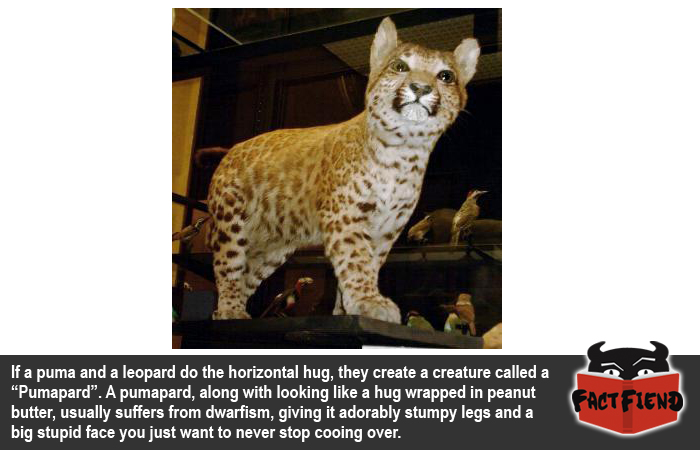 Can we all take a second to appreciate that we live in a world where there is an animal literally called the “pumapard”, come on even the word “pumapard” sounds like something you power by hugs. If you’re curious about how you make one? Well first you need a puma and a leopard …

Now the gender of each creature is reportedly unimportant, a female leopard can create a pumapard by getting freaky with a male puma and vice-versa. Which is presumably why the first ever pumapard was supposedly born in around 1800 after a puma and a leopard were accidentally left in the same cage overnight. After the two animals unsurprisingly spent the night getting their fuck on, one of them became pregnant (it’s not clear whether the puma or the leopard was female in this specific case).

A few months later the world’s first pumapard was born and several zookeepers’ hearts presumably exploded due to the sheer amount of condensed cuteness. Shortly thereafter a man called Carl Hagenbeck decided to breed several dozen more for an unknown private collector in the UK who saw one and was all like “I need about a dozen of these, right the hell now!”

So why were these things so popular? Well it’s due to the fact that regardless of how you pair up a puma and a leopard, the resulting offspring almost always tends to suffer from a condition called feline dwarfism, which is characterised by teeny, tiny legs. Like the kind you’d find on a modern, munchkin cat, which yes, is exactly as hilarious as you’d expect from the name.

Because of this mutation a pumapard will rarely, if ever, grow to half the size of either of its parents, meaning the once fearsome leopard or puma is reduced to little more than large house cat with the most bitchin’ fur coat you’ve ever seen. For some reason, even though now you know they exist and you never want to stop petting one, they’re incredibly rare. It’s not that they’re hard to make, since literally any pairing of a puma and leopard could make one, it’s just that scientists and breeders don’t see the value in breeding them because they look stupid and are born sterile.

Which seems a little shortsighted considering there are probably people reading this somewhere right now that are in the middle of throwing money at their laptop screens in a futile attempt to somehow own one. Come on science, the cure for cancer can wait a few months while you breed a few thousands of these so we can use them to replace meaningful human contact, right?