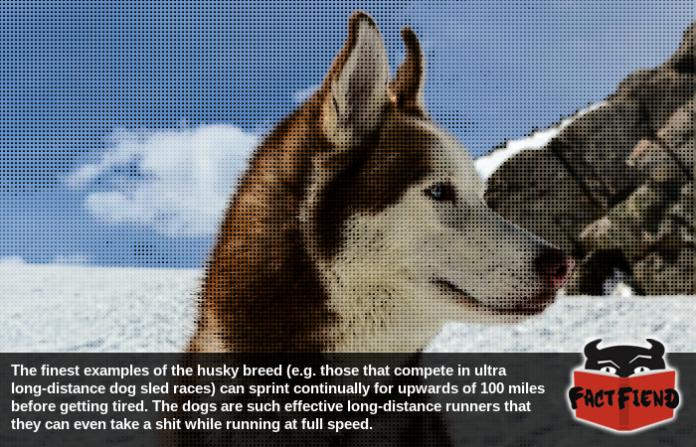 Siberian huskies are purpose bred for long-distance running to such an extent the most impressive examples of the breed can seemingly run forever without succumbing to either exhaustion or the desire to gnaw on their balls like other, lesser dogs. Now although the dog can’t really run forever, it can sprint like 4 marathons in a row whilst constantly shitting itself. Which we feel is equally as impressive.

Like many working dogs the husky has been bred for one specific purpose, in this case, long-distance running and as such, it is almost comically suited for running in a singular direction for a very long time. For example, it’s noted that a garden variety husky bred as a pet could comfortably run 20 miles without any effort or training whatsoever in a single day, every day until it died. Presumably of over-inflated calf muscles. 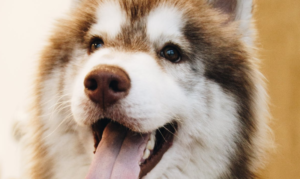 Huskies specifically bred for endurance racing on the other hand can run five times that distance with the absolute finest examples of the breed being capable of running an astonishing 125 miles in a single day for 10 days straight. All while pulling a several hundred pound sled in subarctic temperatures without needing to stop for food or drink like a fluffier version of the Juggernaut.

Something to note is that for exceptionally long races, huskies can’t go all out and will maintain a steady pace of 11 mph, which is just shy of the speed elite marathon runners go when running a race a quarter of the length covered by the dog. During shorter races however, a husky can comfortably run at twice that speed, for 50 miles straight.

So where does shitting come into this? Well, because there’s literally no time at all for huskies to take a dump during a race, they’re trained to do it, while running. Hell, especially well-trained sled dogs will even move to the outside of the pack when they do this. Why? Well, mostly so that the person riding the sled doesn’t get continually showered in frozen dog shit for 10 hours straight. A less than glamorous aspect of professional dog sledding we kind of wish was included in more movies featuring huskies, if only so we’d have footage of Cuba Gooding Jr being pelted with poopsicles. 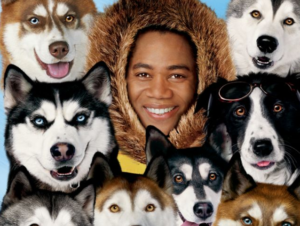