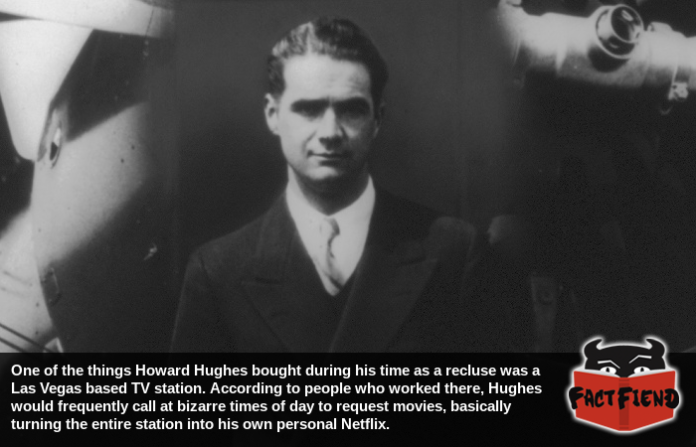 Towards the end of his life billionaire Howard Hughes famously spent several years living in a filthy Las Vegas hotel room decorated with jars of his own piss from which he set about buying pretty much every property in the city. Of these properties the most curious was arguably a TV station Hughes bought seemingly just so that he could watch random movies at 4AM.

To explain, in late 1966 Howard Hughes famously arrived in Las Vegas under cover of night and moved into the top two floors of the Desert Inn hotel. Curiously while you’d think having the world’s most famous billionaire rent two entire floors of his hotel for an indeterminate amount of time would be something the owner was ecstatic about, he was reportedly kinda pissed because he wanted to rent the rooms to Vegas high rollers. Upon hearing about this an annoyed Hughes just up and bought the entire fucking hotel. 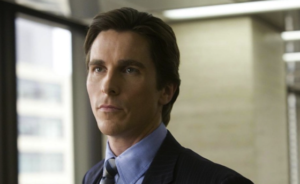 After this Hughes went on a massive spending spree, buying numerous hotels, vast swathes of land and most pertinent to today’s article, Channel 8. A channel Hughes immediately set about turning the station into the 1960’s equivalent of his own personal Netflix account.

For example, one of Hughes’ first edicts for station staff is that they had to start airing shows 24 hours per day, almost purely because he had a habit of staying up all night and got bored of there being nothing to watch. Hughes then gave station executives unlimited access to the back catalogue of RKO Pictures (a movie studio he owned outright) and told them they could air anything they felt like, as long as they ran it past him first.

Why? Well Hughes reportedly micro managed the everloving shit out of the station’s programming to such an extent he would frequently call the studio at like 3 in the morning to demand the put on old movie he wanted to watch, even if they were in the middle of another broadcast. In addition Hughes would sometimes call to have the studio rewind parts of a show he missed or even just play scenes he liked over again. 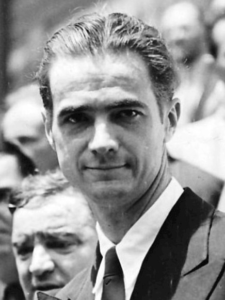 Perhaps the most insane story about Hughes’ obsessive micro management though is the time a studio worked got a call from the billionaire recluse asking them to air old episodes of the series, Sugarfoot. A show the station didn’t carry. When Hughes learned this he told the studio worker to wait. 10 minutes later he called back and told them it was all taken care off. 20 minutes after that a guy turned up at the station with the original film reels for the show and it aired as planned.

Weirdly while you’d assume that the station wouldn’t be popular given that it was basically just Howard Hughes’ favourite movies and shows playing on a loop, channel 8 was pretty popular when it was under Hughes’ control. Mostly because the first thing he did when he took over was immediately ban ads because even a guy sitting in a dark hotel room in his dressing gown who stored his piss in mason jars didn’t have time for ads.