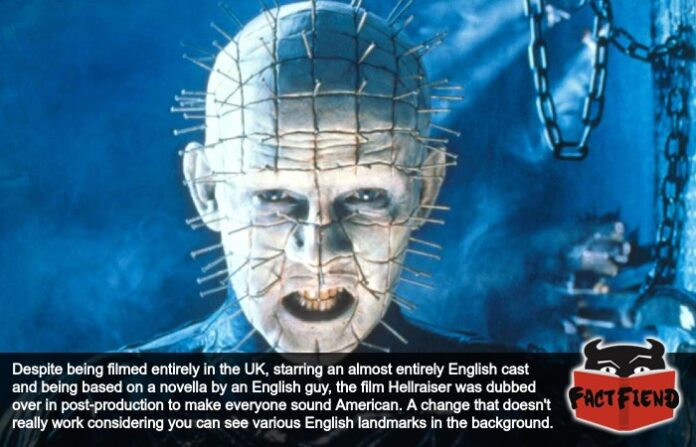 Hellraiser is a film about a S&M loving monsters from another dimension who seek to torture the living shit out of humans foolish enough to try and interact with them. Ostensibly set in an unnamed American town, the film was actually filmed almost entirely within the confines of a single London townhouse, which production tried to hide with comically terrible dubbing.

Based on a novella called The Hellbound Heart by British author Clive Barker, Hellraiser was filmed on a shoestring budget of about $900,000 in and around London, with almost every scene being filmed in a single house Barker picked out because it fit two very specific criteria. It looked weird and was cheap as fuck to film there. 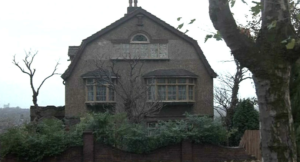 Despite Barker’s admitted unfamiliarity with filmmaking (according to Barker he literally tried to buy a book about directing a film prior to production and couldn’t find one) and the guys funding production, New World, telling the author the film would go “straight to video” test footage ended up being so good that the studio were ultimately convinced that the film could be a success. If they set it in America.

A change Barker was annoyed and baffled by, especially when one of the things the studio asked him to do was film a bunch of pick up shots including one very obviously shot along the River Thames because let’s be real here, no American river looks this grey and shitty. 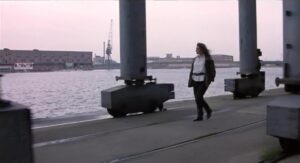 On top of this, the studio requested that several actors in the film were awkwardly dubbed over with American accents including the main fucking antagonist played by Sean Chapman. A decision that became ever more baffling when they brought the actor back for the sequel and let him use his own voice. In addition a number of extras were also dubbed over with accents so bad they’re largely considered the sole detrimental aspect of what is otherwise, a masterpiece of the horror genre.

What makes this so funny though is that all this was all done to try and trick the audience into thinking the film was set in America despite it making way more sense for a guy to consider letting pain aliens from another dimension tweak his balls for eternity because his life is so boring if he primarily resides in a country that annually uses 4 bottles of sunscreen per year.