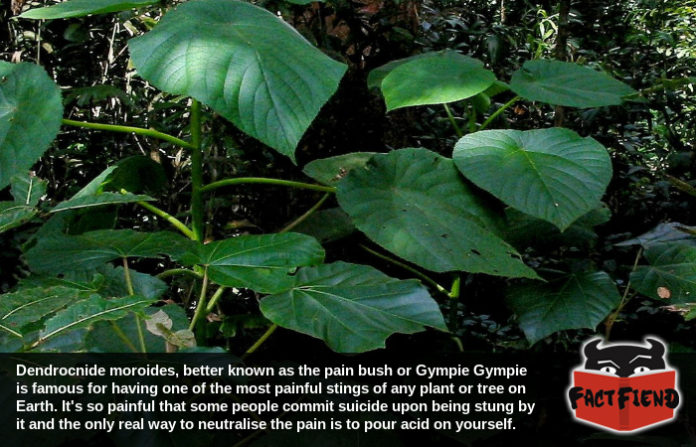 Australia is home to more things that could fuck you up than the maximum security wing of a prison and the continent is home to everything from birds that could kick a hole in your chest to snakes with a bite that could melt your dick off. Oddly one of Australia’s most dangerous inhabitants is an unassuming looking tree with a stupid name. The Gympie Gympie.

At first glance the Gympie Gympie looks harmless enough and could easily be mistaken from a distance for a lesser, shittier tree. However, the tree’s appearance belies a terrifyingly effective defence mechanism, tiny silica hairs that cover virtually the entire plant filled with a hideously potent neurotoxin. These hairs are so fragile that simply brushing against the Gympie Gympie is enough for thousands upon thousands of them to snap off and bury themselves within your flesh, at which point you’ll begin to feel a sensation likened to being set on fire and burned with acid, at the same time. 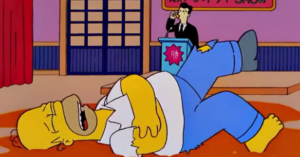 Although the sting of the Gympie Gympie is often described as “the worst pain imaginable” by people unfortunate enough to have touched it, like a gentle summer’s breeze it neither leaves a mark or scars the flesh. Additionally as painful as the sting is, the plant isn’t considered to be deadly because it possesses nowhere near enough toxin to actually kill a healthy adult. Something that hasn’t stopped the plant clocking up a body count anyway.

You see, the sting of the Gympie Gympie is so agonisingly painful that people who’ve been stung by it have been known to try and kill themselves to escape the pain. For anyone currently thinking that surely the pain can’t be that bad we should mentioned that people stung by the Gympie Gympie often need to be strapped to beds so that they don’t scratch their own skin off and have been known to give themselves fucking heart attacks purely through screaming. 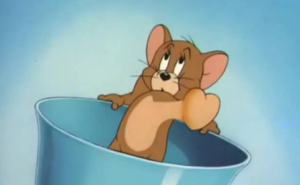 But here’s the really terrifying part, this pain can last for months and some victims of the Gympie Gympie’s sting have reported feeling pain in the affected area years after being stung every time they try and take a hot shower. Also there’s no known way to actually stop the pain and painkillers don’t work, because fuck you.

In fact, the only real way to soothe the pain caused by the Gympie Gympie is to pour a diluted solution of hydrochloric acid onto the affected area or use a wax strip to rip the hairs out of your flesh. Even then, neither treatment is perfect and at best they just dull the pain enough for it to not make you want to gnaw your arm off.

With that in mind, it probably won’t surprise you to learn that during WW2 an Australian army officer simply shot himself in the head after accidentally using a Gympie Gympie leaf as toilet paper and realising that death was preferable to living the rest of his life with a constant stabbing pain in his asshole. 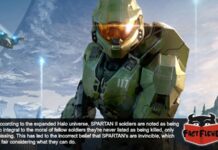 Master Chief is literally not allowed to die