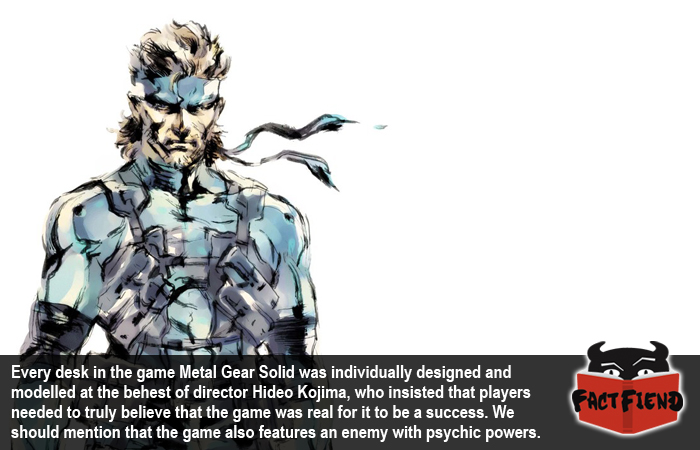 Today we’re going to talk about a game in which the attention to detail was so ridiculous, the director literally made sure every single desk in the game was unique. If you can’t understand why that’s insane, we’re talking about a game that was released 16 years ago.

Games today are often chocked full of tiny little details so inconsequentially small you could measure an ant’s dick with them, but we kind of expect that because we’re playing them on video game consoles with more sheer operating power than a surgeon with a weed-whacker. But we’re talking about a game that was released almost 2 decades ago on a console where the graphics looked like this.

We’re not saying that takes anything away from the game because it was for all intents and purposes, a masterpiece of entertainment. What we are saying though, is that people back then knew what they were getting when they bought a game, reused assets weren’t just expected, they were a video game staple. Hell, just look at any early Mortal Kombat game.

Which is what makes this so surprising, Hideo Kojima, the lead director and writer of the game, absolutely didn’t need to go to the effort of making it so that every desk featured in the game was unique because he already created a game where one of the character’s could read the contents of your memory card.

Kojima himself was once quoted as saying, “if the player isn’t tricked into believing that the world is real, then there’s no point in making the game” which probably explains why his games have consistently been filled with dozens, if not hundreds of Easter eggs seemingly included just to make players say, “wait, I can shoot all of the magazines off of this magazine rack? Ballin’!“.

We’re sure there are cooler, more well-known features in this game we could have talked about, but to be honest, we’re just totally in love with the image of a guy sat individually modelling dozens of desks to make a game more realistic as he presumably sat in an impeccable Japanese office where every desk looked exactly the same.